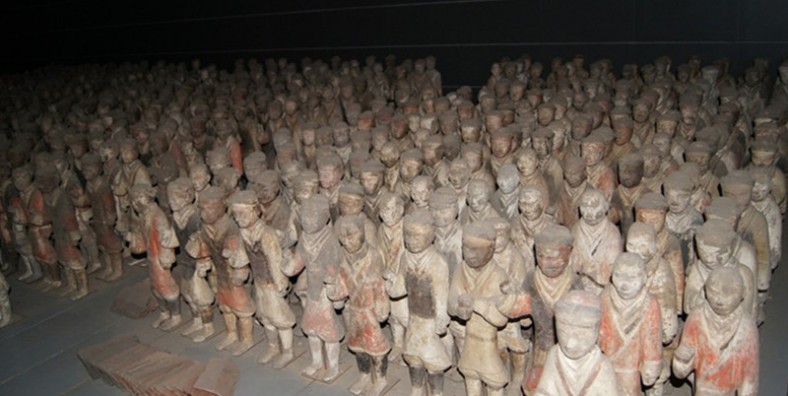 Located on Zhongshan Street, in Xianyang City, the Xianyang Museum is a famous local history museum in China. Originally a Confucian Temple, it was opened to the public in 1962 after reconstruction and expansion. About 28 kilometers (some 17 miles) away from Xi'an City, Xianyang City was the capital of the Qin Dynasty (221BC - 206BC) and also the central location of the Han Dynasty 's(206BC-220) Mausoleums.

Why is Xianyang Museum So Special?

Where is The Xianyang Museum？

Located on Zhongshan Street, in Xianyang City, the Xianyang Museum is a famous local history museum in China. Originally a Confucian Temple, it was opened to the public in 1962 after reconstruction and expansion.

Xianyang was capitaln in Qin Dynasty,is the center of policy, economy and culture. Xianyang Museum is not only a place which the Qin kingdom set as the capital, but also a mainly relic with the Han mausoleum cluster. Originally, it was an Confucian Temple in 1371, and later it was Xianyang Temple built in the early Ming Dynasty and it turned into Xianyang Museum ,at last it was opened to the public in 1962.

Qin Shi Huang who was the first emperor of the Qin Empire was ruthless, but he succeeded in making the area’s first big empire that stretched from Korea to areas south of the Yangtze River. It covered most of Central China north of the Yangtze River. During that time, the various cultures and countries in the area were merged together. He used the human labor to build huge construction projects. He also destroyed much of the religious and philosophical texts of his time as he tried to wipe out opposition, so the Han Empire that emerged from the Qin Empire had a standard of philosophical and religious ideas. The Qin Dynasty wasn’t popular, and it lasted for only fifteen years.

The next dynastic clan called the Western Han Dynasty lasted for much longer. It lasted more than 200 years. The people in the empire were much more prosperous, and the population grew substantially. The population in the Qin Empire collapsed due to the warfare and purges. The Western Han Empire also added territory, so it was much bigger. Members of the Han Dynasty built a terracotta army that resembles the better known Terracotta Army of Qin Shi Huang Di’s mausoleum. About 3,000 statues of the Western Han are on display in the fifth and sixth exhibition halls. They are arranged in formation. The mock army is more than 2,000 years old.

The museum has 3 halls showcasing historical relics that depict the 140 year old history since the capital had been built in the Xianyang City. The first hall mainly introduces the background of the capital’s setting in the city.

It highlights the huge innovation of military power, economy and agriculture, unifying measures and weights and the other 6 kingdoms. The second exhibition hall is mainly for the achievements in architecture. The third exhibition hall displays the site of Xianyang palace, the site for handicraft workshop as well as handicrafts such as silk, jade ware, bronze ware and pottery.

Xianyang Museum is home to 50 relics of horse figures that had been excavated from the site of the ancient city. This showcase the strong relationship that ancient china’s agriculture, war and traffic had with horses. There are various kinds of horses here such as a horse with the body of a man, horses with horns and wings that embody the respect and apotheosis to horse.

Throughout the northern Xianyang City, there are 9 tombs of emperors as well as hundreds of other tombs from the Han Dynasty. The museum also has 3000 color painted terra cotta figurines in the hall that had been excavated from the Cahngling Tomb’s accompanying tomb. It includes 583 figures riding on horses and 1965 soldier figures.

The 3000 color painted terra cotta figurines are the large scaled figures to be excavated earliest in the country. This founded the image of the imperial armed escorts as well as showcased the powerful military strength during the Han Dynasty. These figures can be found in exhibition halls 4 and 5.

How to get to Xianyang Museum

If you want to get out of the traffic and hassle of navigation, you can book a private tour package that includes visiting, dining and transfer from us. Our local guide and driver will escort you to the Xianyang Museum in Xi’an in the fastest and most convenient way and take care of all the details. You just have to focus on the visiting.