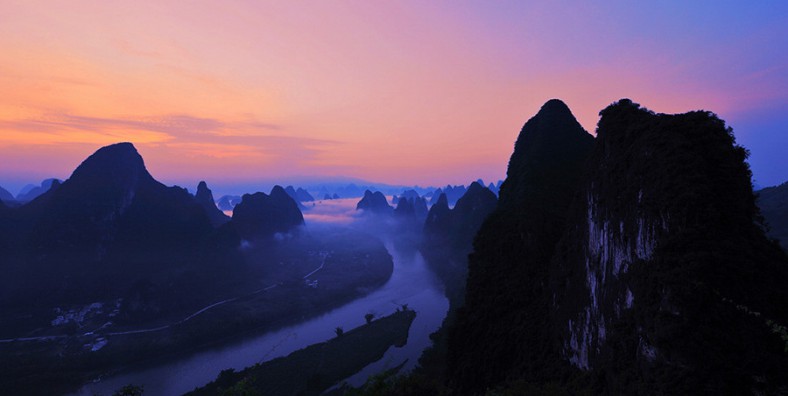 The light and shadow, sea of clouds, sunrise and rosy clouds here have attracted numerous photographers and photography lovers. The works shot by Guilin photographers here won the bronze medal of the 10th International Film Festival.

Why is Xianggongshan Hill So Special?

At first, Xianggong Mountain was just a small karst hill on the west bank of Lijiang River in Yangshuo County, Guilin. A few years ago, a local photographer took some photos on this mountain top and won a bronze medal in an international photography competition. Xianggong Mountain became famous overnight. Since then, it has become a popular tourist destination for enthusiastic photographers.

Xianggong Mountain is located between picturesque mural mountain and Huangbu Beach of Xingping Town, also known as Xianggong Mountain, about 28 kilometers (18 miles) from Yangshuo and 57 kilometers (35 miles) from Guilin. Xianggong refers to ancient government officials. The whole mountain looks like a man in an official hat and a feudal Chinese costume, hence its name. It was also named Hebaoshan by the local people after the village of Hebao at its foot.

There is a row of grey ceramic tile houses at the entrance. A wooden plaque is hung above the main entrance with four Chinese characters engraved on it, meaning to provide a panoramic view. From these words, you can guess how Xianggong Mountain will entertain you. Through the entrance, you will begin to climb the stone steps. On the way, you may think that the scenery here is dwarfed by so many beautiful scenic spots in Yangshuo. However, when you reach the top of the mountain in about 15 minutes, you will be amazed at the beautiful scenery.

Standing on the three-storey sightseeing stage, you can look over a panorama of Yangshuo landscape. The meandering Li River, embraced by rolling hills on both banks, makes a 180-degree bend here. The sea of clouds, sunrise and rosy sunglows will surely not disappoint you. Looking downwards, boats and bamboo rafts sail down the river. Fishermen work on the river side. White farming houses are scattered here and there on the vast fields. In the distance, hills rise one above the other, partly visible and partly hidden. In sunny days, the water surface is checkered with sunlight and shadows, making you believe that you have set foot on a wonderland.

If you come to Yangshuo, do not miss Xianggong Mountain, the best spot to have a bird view of the sceneries along Li River! Just press the shutter and keep Yangshuo a life-long memory!

How to Get to Xianggong Mountain from Yangshuo

How to Get to Xianggong Mountain from Guilin