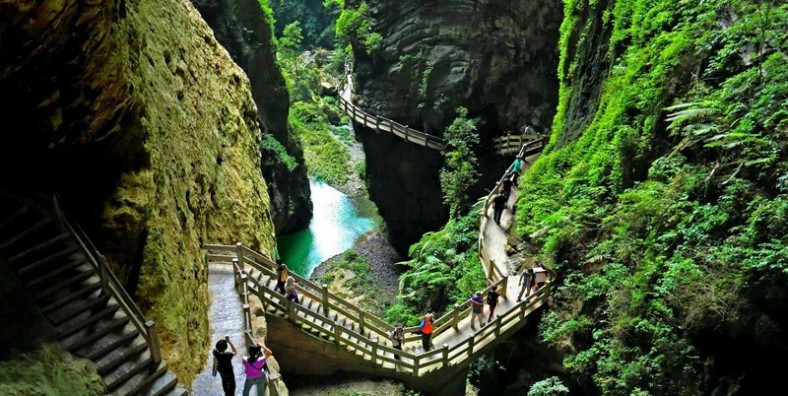 Why is Wulong Karst Landscape So Special?

Wulong karst landscape contains three Karst areas, including the Three Natural Bridges, the Houping Tiankeng and Furong Cave. These karst landscapes are remarkable cases to study the evolution history of the earth and are important records of life on the earth. Also, the changeable and peculiar, fantasy and marvelous spectaculars the landscape brings charms a lot of tourists there. It was named as a world natural heritage by UNESCO in 2007. Together with Stone Forest in Yunnan and Libo Karst in Guizhou, Wulong Karst is a world natural heritage in Chongqing.

Where is Wulong Karst Landscape?

How to Get to Wulong Karst Landscape?

If you want to get rid of hustle of transportation and troublesome navigation, you can book a private tour package which covers visiting, dining and transfer from us. Our local tour guide and driver will escort you to Wulong Karst Landscape with speed and convenience, and take care of all the details. You just need to focus on travel.

By Train: Take a train from Chongqing North Railway Station to Wulong and then take a taxi to Xiannü Town Tourist Center.

Furong Cave is a large-scale limestone cave and located next to Furong River in Jiangkou Town of Wulong County, which is about 190 km from Chongqing City center. Formed about 1.2 million years ago, and discovered in 1993. Furong Cave has abounds in various speleothems and sediment, and formed more than 300 scenic spots in the cave. The accumulation and breakage of stalagmites records the evolution of the limestone in the cave. Numerous and varied speleothems demonstrate the amazing force of nature. The beautiful scene is a wonder that nature created.

Houping Tiankeng (Houping Giant Doline) in Wulong Karst National Geology Park is situated at Houping Town, 88 kilometers (55 miles) from Wulong County. It is the first doline cluster type of erosion discovered in the world.This 150,000-square-meter karst doline cluster is mainly composed of five smaller tiankengs developed in the soluble limestone of Ordovician Period, among which, Qingkou Tiankeng is known as the most beautiful one. Showcased in gorges, dolines, shafts and underground caves, the tiankengs constitute an integrated karst ecosystem, ideal for sightseeing, adventure and scientific study of the geological evolution.