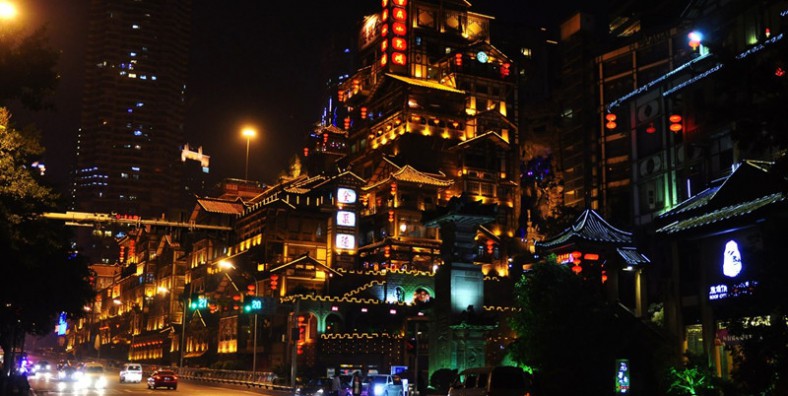 Relying on the mountains for support, the buildings are constructed along the riverside and extend from Jiefangbei directly to the riverside. Visitors to the area can take in the rows of raised buildings, admire Hongya Dripping, stroll mountain towns and old streets, appreciate the Bayu culture, and warm oneself over a mountain-side hotpot meal. The area overlooks the intersection of two rivers, and has a bustling nightlife and other leisure entertainment services. The area surrounding Hongya Cave is often the theme of Jiefangbei banquet halls and other leisure destinations around Chongqing, with postcards portraying old Chongqing always including an unforgettable re-creation of the area.

in the early Ming dynasty when chongqing was established, 17 gates were built to the city, with nine kept open and 8 closed. Hongya was among those that were kept closed and only used for military matters. In the late Ming dynasty, artillery cannons were installed on the left end of the wall, thus explaining why Cangbai Road was previously called Paotai Avenue (Cannon Platform Avenue). This area is marked by a prevalence of steep precipices, with the city wall and Hongya Gate both constructed along one such precipice. To the lower right of Hongya Gate is a cave, which is what people call Hongya Cave. In previous eras the cave had a stream running from the upper precipices down to the river that formed a waterfall, popularly known as Hongya Dripping

With the passage of time, more porters moved in. But the Residents of Hongya Cave are relatively poor city residents, and if they aren‘t transporting goods then they are working on the river. A large portion of those living closest to the cliffs are engaged in laundry services, with the dull thumping sound of beaten clothing rising along with the early morning temperature. Later in the day, row after row of supporting beams under the raised homes are often draped with drying clothes, silhouetted by the setting sun.

After 1949, ports along the river, especially the gates facing the river, fell into disuse and disrepair. But The construction of Binjiang Road  (bīn jiāng lù 滨江路) completely changed the face of both sides of the river, bringing with it the establishment of a culinary district specializing in Chongqing cuisine. Following from the recent new development, the rows of ancient raised buildings backing on steep cliffs and facing the river have become a must-visit location for all those interested in the new and old Chongqing.

Diaojiaolou  (diào jiǎo lóu 吊脚楼)
Diaojiaolou, old city walls,black tiles, ancient windows and doors, and bluestone roads are all characteristics of Bayu style. For most Chongqing residents, these things are all very familiar. Still, new developments with these characteristics are hard to be found. The development Hongyadong fills his gap. The project adopts the traditional “diaojiaolou”, hillside house on stilts. As its inspiration, using the natural rise and fall of hills in its architecture to build a riverside area unites Bayu culture, stilted homes and busy port culture. The development not only maintains the old lock of Chongqing, but promotes its Bayu history to make Hongya cave focal point of the city.

One thought on “Hongya Cave in Chongqing”