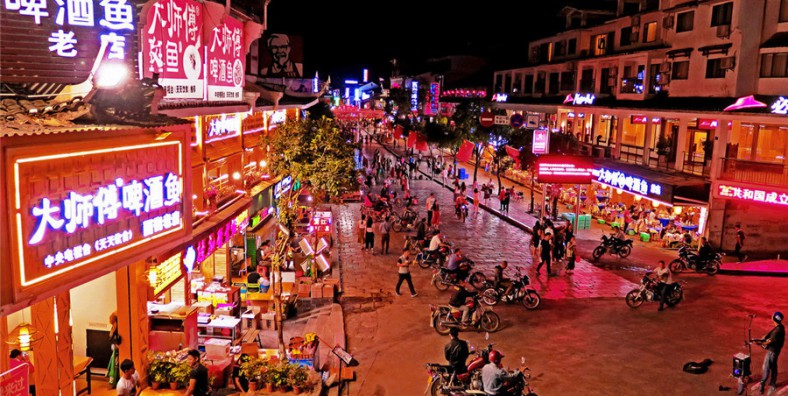 After more than 1400 years, it is Yangshuo's oldest and most prosperous street and one of Yangshuo's important tourist attractions. Ming city walls, inscriptions, ancient temples, ancient pavilions, former residences of celebrities, memorial halls and other ancient buildings are well preserved.

Why is West Street So Special?

West Street is Yangshuo’s oldest street with a history of more than 1400 years. This street is located in the center of Yangshuo County. Since the 1980s, it has become the window of eastern and western cultures and the largest “foreign language center” in China. It is the most prosperous area in Yangshuo, where about 100,000 foreigners come to travel or study every year. Tourists are attracted by the unique cultural combination of West Street.

Where is West Street

Yangshuo West Street is a pedestrian street in Yangshuo County, Guilin City, Guangxi Zhuang Autonomous Region. Located in the center of Yangshuo ancient town, it is about 8 meters wide and nearly 800 meters long, with a slight east-west trend. It reaches binjiang road in the east and Pantao Road in the west, and meets Xianqian Street and Chengzhong Road in the middle. After more than 1400 years, it is Yangshuo’s oldest and most prosperous street and one of Yangshuo’s important tourist attractions. Ming city walls, inscriptions, ancient temples, ancient pavilions, former residences of celebrities, memorial halls and other ancient buildings are well preserved.

History of the West Street

West Street is the oldest street in Yangshuo County with a history of more than 1400 years. When Yangshuo County was set up in 590 (the 10th year of Emperor Kaihuang in Sui Dynasty), the county had a street about 200 meters long and 5 meters wide. At that time, there were only a few shops dealing in daily necessities in the street, and most of the residents were farmers.

West Street was actually built in 1674. The early west street was not long and got its name because of its geographical location. After Yangshuo County City built a stone wall between Yuan Dynasty and Zhengnian, it took the street in front of the county government as its front street and connected with a cross street from east to west. The next section from south to Bilian Peak was an alley. The eastern section connected with the wall along the Lijiang River and connected with the south street. Later, the area was called Cross Street and the longest section to West Street was called West Street.

In the early 1970s, Yangshuo was opened to the outside world. Western tourists discovered West Street. At the same time, they showed great interest in the local ancient and elegant houses, traditional culture and folk customs. Since then, more than hundreds of thousands of overseas tourists visit West Street every year for sightseeing and leisure. They live for a few days, 10 days and a half months, some for a year or more, and some even marry and set up shop in West Street. West street has become a “foreigner street” where Chinese and western cultures blend, a “global village” beyond the region, and a huge “foreign language corner”.

West Street is 517 meters (1696 feet) long and 8 meters (26 feet) wide, winding along its length. It is completely paved with marble and is a typical example of streets in southern China. It is highly appreciated by foreigners for its simple style and courtyard-like environment. There is a saying that “half is a village, the other half is a shop”.

Because sometimes there are more foreigners than Chinese, this street is also called “foreigners street”. If you hear Chinese elderly women speak English, don’t be surprised, because this street is called “global village”. Apart from Yangshuo’s local accent, English has become a common language. West Street is modern and fashionable. Almost every shop has bilingual signs. More than 20 shops have been opened by foreigners who have settled here.

Chinese going there may think they are in foreign countries, while foreigners come here to look for ancient Chinese civilization. However, whether you are a Chinese or a foreigner, whether physically or psychologically, this is a good place to rest. West Street will rid you of all the pressure and burden and give you a more peaceful view of life. It shows different faces at different times: calm and peaceful in the morning and fashionable and modern in the evening. Traveling to that place is an experience with scenery, people, soul and yourself.

Visit West Street and you will be surrounded by a series of traditional folk and amazing international elements. All kinds of shops, handicraft shops, calligraphy and painting shops, backpacking shops, cafes and the Chinese Kung Fu Institute compete to attract attention. You can see many things, from embroidered silk and batik weaving to small shoes worn by women before the liberation of the People’s Republic of China in 1949. In addition, in other parts of the street, you may find bars and cafes, some of which are run by foreigners and decorated with bamboo rafts, fish baskets, batik tablecloths, etc.

West street is not only visually satisfying. You will be attracted by food from all over the world: Ciba (a Chinese rice cake) and Yangshuo rice flour, authentic Italian coffee, banana cake, western food, etc. So now, choose a cafe and have a cup of coffee, let the beautiful scenery and beautiful music take you to a wonderful world.

One thought on “West Street in Yangshuo County, Guilin”