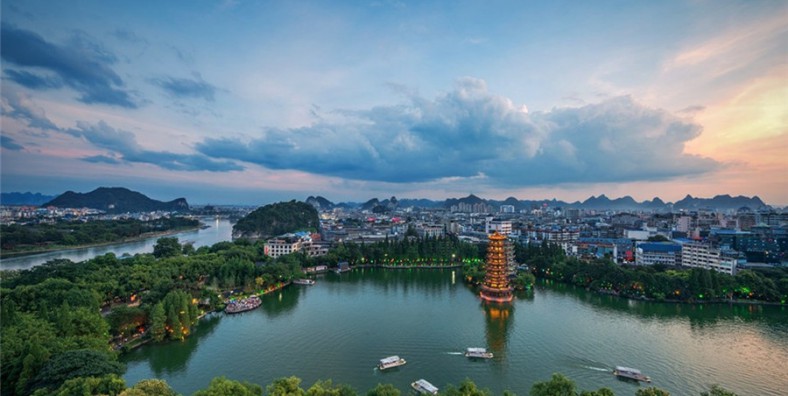 Why is Two Rivers and Four Lakes So Special?

Where is Two Rivers and Four Lakes

The Liangjiang and Sihu Scenic Area is located in the picturesque city of Guilin. It refers to the landscape around the city, including part of the Lijiang River, taohuajiang, Longmu Lake, Gui Hu, Ronghu Lake and Shanhu Lake.

Guihu Lake was originally the city moat of the western Guilin City in Song Dynasty (960-1279). It measures over 1, 700 meters (1 mile) from north to south and about 110 meters (120 yards) wide on average. A large number of precious arbors and flowers are planted along the lake, such as banyan tree garden, gingko garden, white pines garden, redwood garden, magnolia garden and palm garden. It is also a world of bridges such as Xiqing Bridge, Baoxian Bridge, Lize Bridge, Yingbin Bridge and Guanyin Bridge where visitors can enjoy the beautiful landscape and find them a good setting to take photos. It is not exaggerating to call it an Expo combining famous gardens, flowers, trees and bridges in one. Walk in it, visitors will feel fresh and comfortable as if attaining the perfection of the harmony between man and nature.

Its history can be traced back to Tang Dynasty (618-907) and Song Dynasty. Originally named Nanyang River, it was then an artificial moat in southern Guilin. The Yuan Dynasty (1271-1368) was called Jianhu. It was expanded in the Ming Dynasty and became an inner lake. Since then, many local governments and public institutions have been set up on the lake. Rich and famous people have built houses by the lake. Many poets and intellectuals have written many poems and literary works to describe the charming beauty of the lake.

Its characteristic is to integrate history and culture into nature. On the north side of Longmu Lake, tourists can see a group of artificial scenic spots, such as the Dongzhen Gate and the Song Dynasty city wall ruins. A very large building complex is scattered around. The building includes Song Street, Banjie, Long Mu Pagoda, Long Mu Night Scene and Ancient Song City. The Long Mu pagoda was built in imitation of the Longhua pagoda in Shanghai in the Song Dynasty. In addition, there is an ecological landscape area between Longmu’s Hunan Province and Folding Jinshan Mountain, where tourists can enjoy forests, grasslands, waterfalls and streams.

The beautiful Lijiang River, like a poem and a painting, is an important part of Guilin’s landscape. Taohuajiang bifurcated into Lijiang River in Ming Dynasty. The two rivers are thus connected, adding more beauty to each other.