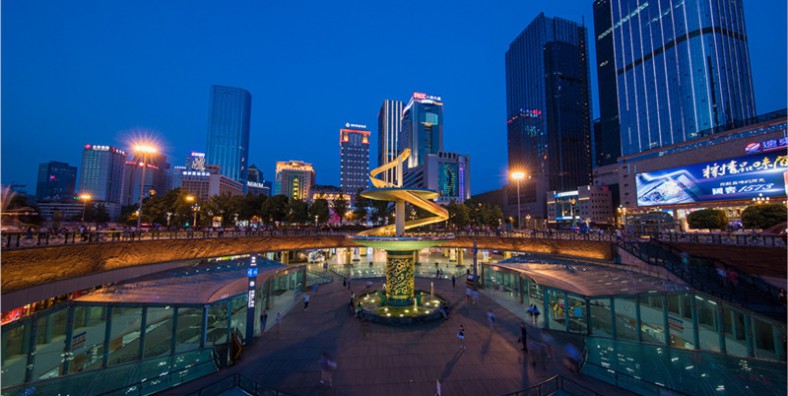 At the center of the city lies Tianfu Square, the location of the iconic Mao Zedong statue which overlooks Chengdu. Although for years Tianfu Square was just a construction site, it re-opened in 2009 to boast scenic features like waterfalls and gardens. Hosting the central subway station, the square is lit up at night and fountains are illuminated by neon lights.

Tianfu Square, overlooked by an enormous Chairman Mao statue, is in the center of the city and was once the site of the Imperial Palace. That was torn down during the Cultural Revolution — to the dismay of local residents. Every evening at dusk, as well as at noontime, an elaborate water show, synchronized to music, bursts out from the square’s fountains and attracts crowds of people during the spring and summer. Below the square is a shopping mall and the hub of Chengdu’s subway system. The major streets branching out from here are Renmin Road south and north and Taishan Road. These roads lead north to the sports stadium, west to People’s Park, east to Chunxi Shopping District and south toward the “rich” and more foreign part of town.

Tianfu Square is a large tourist attraction in Chengdu, so expect to see vendors waiting for you outside of the subway exit, most commonly offering to take your photograph.

What Do You Think?

If you’ve been to Tianfu Square and have a thought to share, leave it below.