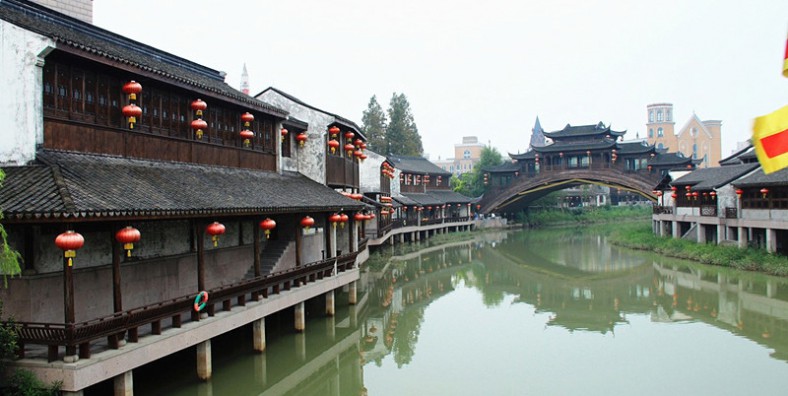 Song Dynasty Town (Songcheng) is the largest theme park in Hangzhou, featuring the cultural characteristics of the Song Dynasty (960 - 1279 AD), and also the first theme park built in Zhejiang.

Opening Hours: 9:00 – 40 minutes after the last Romance of the Song Dynasty ends

Why is Song Dynasty Town So Special?

As a theme park, Song Dynasty Town combines the culture of the Song Dynasty and the natural scenery of West Lake. It displays a prosperous scene of the Song Dynasty by employing a combination of realistic and romantic techniques. It comprises three areas: the Culture Performance Area, the Hi-Tech Experience Area, and the Recreational Area.

The Culture Performance Area includes some theaters, streets, Buddha caves, and some shops where you can learn about what Hangzhou was like in the Southern Song Dynasty. The Hi-Tech Experience Area provides many special experiences. The Recreational Area has many recreational programs for children.

With a 26-meter (85 feet) tall mountain as its background, Culture Street is where large-scale celebratory activities, such as the Torch Festival and the Water-Splashing Festival, are held. As the fire on the mountain is lit during festivals, the locals bow to it to pray for happiness and peace.

As the most magnificent square in Song Dynasty Town, Rostrum Square is a wonderful place for visitors to experience the lifestyle of the Song Dynasty, where you can dress in typical Song-style clothes and even an emperor’s robe.

Shijing Street is lined with stores, pavilions, terraces, and towers. Many performances, such as throwing an embroidered ball to choose a husband, and puppet shows are available.

Fairy Hill and Buddha Caves: Hangzhou was once the Buddhist center of the Northern Song Dynasty, during which a number of Buddhist temples were built successively. You can explore Buddhist caves, see a statue of Sakyamuni, and visit the Temple of the God of Wealth, the Memorial Hall of the Matchmaker, and the Kwan Yin Pavilion.

Romance of the Song Dynasty

It is a large panoramic show, based on the historical stories and ancient myths of Hangzhou city, featuring dancing and acrobatics. The show has been performed over 17,000 times, and more than 50,000,000 people have enjoyed it. It is praised by overseas media as one of the world’s three most famous shows, together with the O Show in Las Vegas and the Moulin Rouge in Paris.

There are five scenes in the whole show. The introductory scene dates back to ancient times, displaying the historical development of Hangzhou city. The first scene exhibits the prosperous living condition of the city during the Southern Song Dynasty (1127 – 1279 AD), while the second scene tells audiences a story about a general named Yue Fei (1103 – 1142 AD), who was a hero fighting against the dynasty’s enemy. The third scene presents the fairytales and beautiful love stories which happened around the West Lake (a famous spot in Hangzhou), and in the last scene audiences are exposed to the charm of modern Hangzhou city.

How to get to Song Dynasty Town in Hangzhou

If you want to get out of the traffic and hassle of navigation, you can book a private tour package that includes visiting, dining and transfer from us. Our local guide and driver will escort you to Song Dynasty Town in Hangzhou in the fastest and most convenient way and take care of all the details. You just have to focus on the visiting.