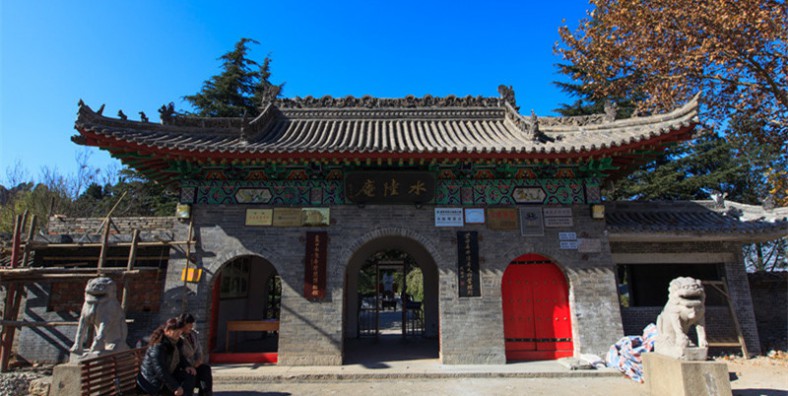 Famous for more than 3,700 delicately painted clay Buddhas culptures with a long history of more than 1,000 years, Shuilu Temple, or Shuilu’an Temple, is called “The Second Dunhuang in China”. Situated in Lantian County, about 60km (37 miles) to the southeast of Xi'an city, Shuilu Temple is a small courtyard at the foot of Wangshun Mountain.

Ticket: Free. But you need to get the ticket by the valid ID certification like a passport.

Why is Shuilu Temple So Special?

Shuilu Temple is located at the foot of Wangshun Mountain, Puhua Town, 10 kilometers east of Lantian County, Xi’an city, Shaanxi Province. It is a famous temple of the six dynasties, which is famous for the preservation of exquisite and rare colored sculptures in ancient times.It is surrounded by water on three sides, shaped like an island, surrounded by castle peak stands, the river circulation, so called Shuilu Temple.

Famous for more than 3,700 delicately painted clay Buddhas culptures with a long history of more than 1,000 years, Shuilu Temple, or Shuilu’an Temple, is called “The Second Dunhuang in China”. Situated in Lantian County, about 60km (37 miles) to the southeast of Xi’an city, Shuilu Temple is a small courtyard at the foot of Wangshun Mountain.

First built in Sui Dynasty (518-619), Shuilu Temple used to be the Shuilu Hall of Wuzhen Temple, a grand temple complex, which was damaged over time. In 1563 of the Ming Dynasty (1368-1644), local seignior changed its name into Shuilu Temple and invited sculptors to make the most of the sculptures we can see today, while a few sculptures here were made in Tang Dynasty (618-907) and the Five Dynasties (907-960).

All the clay sculptures are in Zhusheng Shuilu Hall behind the first hall. The hall was divided into 2 parts by a wall. On the front part of the wall are sculptures of three Buddhas, Sakyamuni in the middle, Amitabha on the left and Bhaisajya Guru on the right, all with a height of 5.63m (18.47 ft). These three Buddhas all have exquisite back screens behind them and two retinues on each side.Beside the Sakyamuni are Ananda and Kasyapa, and the retinues beside the other two Buddhas are a Confucian and a Taoist figure. The co-existence of Buddhas with Confucian and Taoist figures clearly shows the secularization of Buddhism in Ming Dynasty.

On the back of this wall, there are three sculptures of Three Great Beings, Avalokitesvara sitting on a stage in middle, Samantabhadra riding a white elephant and Manjushri on a lion on the sides. These three Buddhas wear tall crowns and have moustaches which can also be seen on other Buddha sculptures here. This kind of androgynous Buddha figures that have characteristic of both sexualities is very rare in China.

On the opposite of the Three Great Beings, a group of sculptures showing “Thousand Buddhas listening to Sakyamuni talking about Dharma”, some of which are made by famous Tang sculptor Yang Huizhi. Among the crowd you can see some of them are figures in Confucianism and Taoism, which shows the fusion of Buddhism, Confucianism and Taoism in China.

What’s most impressive are the clay sculptures on the north and south side walls telling the story of Sakyamuni’s whole life. There are also sculptures of rivers, gardens, pavilions, pagodas,
hundreds of Buddhas, thousands of believers and various animals, demonstrating vivid imagination and superb skills of the sculptors.

On the walls beside the door is Sambhogakaya on the north and Dharmakaya on the south. Three clouds above the Dharmakaya carrying Confucious, Sakyamuni and Laotze, the representatives of Confucianism, Buddhism, and Taoism, is another sign of the fusion of the three religions.

How to get to Shuilu Temple

If you want to get out of the traffic and hassle of navigation, you can book a private tour package that includes visiting, dining and transfer from us. Our local guide and driver will escort you to the Shuilu Temple in Lantian County in the fastest and most convenient way and take care of all the details. You just have to focus on the visiting.

You can take bus 926 at Xi’an City Stadium Station and get off at Lantian Bus Station. Then take the express bus in the station to Shuilu Temple.