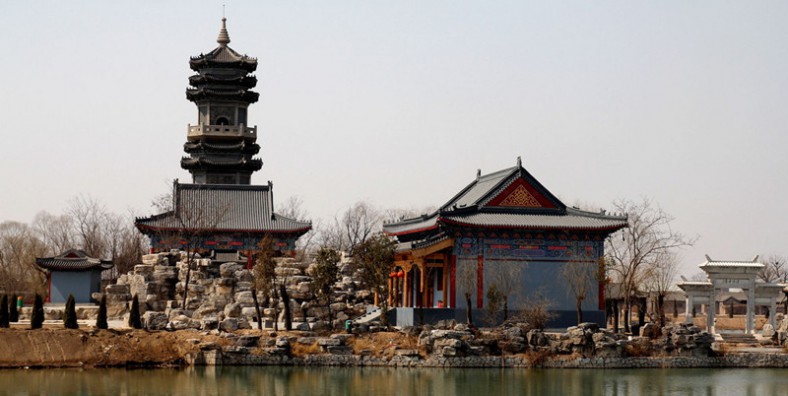 It contains more than 20 scenic spots and 50 scenic spots, which are orderly distributed around the central lake of the cultural city. The North Putuo Island in the lake is exquisitely built and all the buildings are decorated with classical beauty. Now bright colors may fade and plaster may fall off, but the taste of China's last two feudal dynasties still exists.

Why is Shengshi Nangong Film & TV City so Special?

Covering an area of more than 75 acres (about 30 hectares), it is a multifunctional film culture city integrating film production, sightseeing, entertainment, film education and cultural exchange. It contains more than 20 scenic spots and 50 scenic spots, which are orderly distributed around the central lake of the cultural city. The North Putuo Island in the lake is exquisitely built and all the buildings are decorated with classical beauty. Now bright colors may fade and plaster may fall off, but the taste of China’s last two feudal dynasties still exists.

The magnificent North Putuo Temple is located in the northeast of the lake. It is colorful with 500 clay bodhisattvas in different postures standing in the hall. Pilgrims keep coming to the north of Putuo Temple. Putuo Temple is reputed as one of the four major Buddhist ceremonies. The other three are the East Putuo Mountain in Zhoushan, the South Putuo Temple in Xiamen, the Potala Palace in Lhasa and the West Putuo Mountain. There are three gardens around the temple, named pine garden, bamboo garden and plum garden, which are full of Chinese traditional culture.

Honglou Park was built after Hong Lou Meng, one of China’s four classical novels. It is also a shooting place. The grandeur of the park reminds people of the scenes in this great novel. In memory of the author Cao Xueqin, a statue was erected.

The Nangong Film and Television Culture City in Shi Sheng has recorded the development of China’s film industry. Following the Wuxi Film City and Zhuozhou Film City of CCTV, it is the third film shooting place in China featuring buildings in Ming Dynasty (1368-1644) and Qing Dynasty (1644-1911). About 800 movies and TV plays were shot here, including some quite popular ones. This is a good place to learn how to make movies.

The movie is located in the northwest of the lake. An ancient town composed of three streets in the style of Ming and Qing dynasties will take you back to those past dynasties, and the calligraphy and painting museum and clay sculpture museum are the best places to cultivate personal taste. There is also a village, an opera stage, pavilions, terraces, ancient palaces, shops, markets, forts and trenches, allowing it to make different kinds of movies.

With these settings, tourists can take photos or make micro movies with rich old-fashioned flavor. Lucky tourists may encounter film crews and have the opportunity to take pictures with movie stars or play roles in movies.

In addition, this cultural city is also full of various interesting activities, such as martial arts and throwing hydrangeas. Every four months in the Chinese lunar calendar, there is a Buddhist pilgrim fair with lion dance, drum performance and other folk dances.