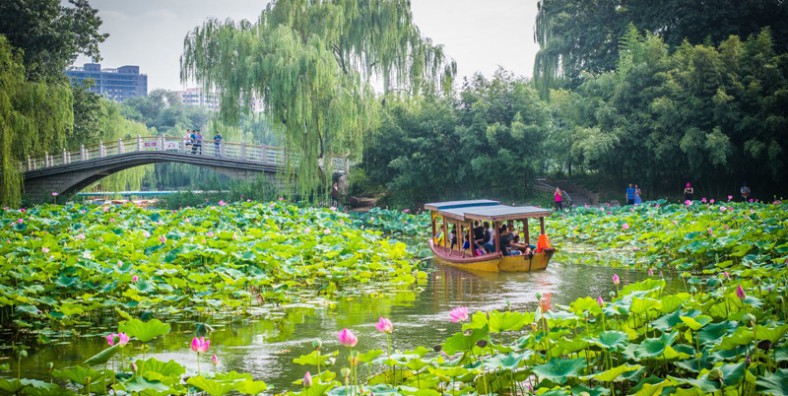 Why is the Purple Bamboo Garden in Beijing so Special?

Purple Bamboo Park, also called Zizhuyuan Park or Black Bamboo Park, is one of the seven largest parks in Beijing. The park wins its fame for bamboo. Various bamboos are planted including purple bamboo, green bamboo, mottled bamboo, garden pink, and Phyllostachys aurea, etc. Everywhere in the park integrates the factor of bamboo, such as the stream, stones, trees, buildings, forming into different bamboo scenery of which the mottled bamboo garden is the most representative, reputed as ‘the garden in the garden’.

Where is the Purple Bamboo Garden in Beijing?

Purple Bamboo Garden is situated at 45, Baishiqiao Lu and near the west of the Capital Gymnasium in Haidian District.

The park consists of three connecting lakes covering over a total area of 48 hectares. The three major lakes in the park were formed in 1159. During the Ming Dynasty, the Wanli Emperor built a royal garden on the bank of the lake in 1577, and the bamboo was planted following that. In 1954, the park was rebuilt and open to the public. During the 2008 Summer Olympics, it was selected as one of the three protest zones.

Constructed around canals and large lakes, it’s famous for its bamboo forest scenery. When you walk into the garden, you will find yourself in a bamboo world garden displaying more than 50 kinds of bamboos. Among all kinds of bamboos, such as mottled bamboos, purple bamboos, fishing rods and bamboos, the most common one is purple bamboos. From April to June every year, most of the things in the garden of the bamboo culture festival are decorated with bamboos, including floors, pavilions and tables, chairs and bridges. Through various bamboo buildings here, you will have a better understanding of Chinese bamboo culture, and even meet some of many people to enjoy the art of bamboo dance.