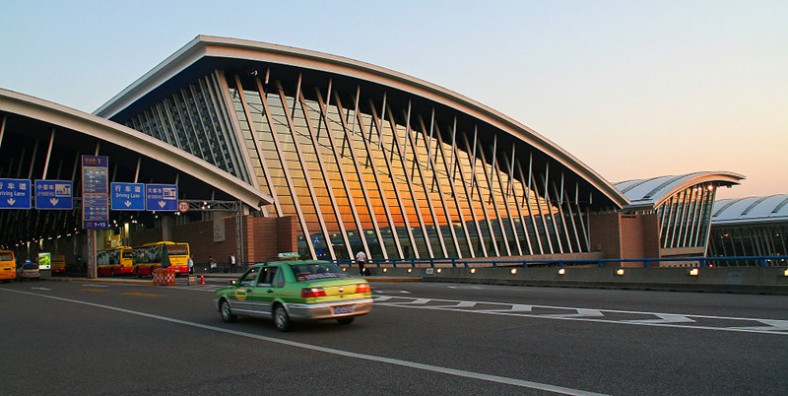 The airport is the main hub for China Eastern Airlines and Shanghai Airlines, and a major international hub for Air China, as well as secondary hub of China Southern Airlines. It is also the hub for privately owned Juneyao Airlines and Spring Airlines, and an Asia-Pacific cargo hub for UPS[1] and DHL. The DHL hub, opened in July 2012, is said to be the biggest express hub in Asia.[2]

Pudong Airport has two main passenger terminals, flanked on both sides by four operational parallel runways.[3] A third passenger terminal has been planned since 2015, in addition to a satellite terminal and two additional runways, which will raise its annual capacity from 60 million passengers to 80 million, along with the ability to handle six million tons of freight.[4]

Pudong Airport is a fast-growing hub for both passenger and cargo traffic. With 3,703,431 metric tons handled in 2017, the airport is the world’s third-busiest airport by cargo traffic. Pudong Airport also served a total of 70,001,237 passengers in 2017, making it the second-busiest airport in China, fifth-busiest in Asia, and the ninth-busiest in the world. It is also the busiest international gateway of mainland China, with 35.25 million international passengers.[5] By the end of 2016, Pudong Airport hosted 104 airlines serving more than 210 destinations.[6]

Shanghai Pudong is the busiest international hub of China, and about half of its total passenger traffic is international.[7]Pudong Airport is connected to Shanghai Hongqiao Airport by Shanghai Metro Line 2 and the Shanghai Maglev Train via Pudong International Airport Station. There are also airport buses connecting it with the rest of the city.

Prior to the establishment of Pudong International Airport, Shanghai Hongqiao International Airport was the primary airport of Shanghai. During the 1990s, the expansion of Hongqiao Airport to meet growing demand became impossible as the surrounding urban area was developing significantly, and an alternative to assume all international flights had to be sought.[citation needed]

After deliberation, the municipal government decided to adopt the suggestion from Professor Chen Jiyu of East China Normal University, who wrote a letter to the Mayor of Shanghai Xu Kuangdi[citation needed] suggesting that the new airport should be constructed on the tidal flats of the south bank of the Yangtze River estuary, on the coast of the Pudongdevelopment zone to the east of Shanghai.

A second runway was opened on March 17, 2005,[citation needed] and construction of phase two (including a second terminal, a third runway and a cargo terminal) began in December 2005 and started operation on March 26, 2008, in time for the Beijing 2008 Summer Olympics.

In November 2011, Pudong Airport received approval from the national government for a new round of expansion which includes two runways. The 3,800-metre fourth runway, along with an auxiliary taxiway and traffic control facilities, is projected to cost 2.58 billion yuan (USD 403 million). The 3,400-metre fifth runway, along with a new traffic tower, will cost 4.65 billion yuan (USD 726.6 million). Construction was completed in 2015 and has doubled the capacity of the airport.[8][9]

Terminal 1 was opened on October 1, 1999 along with a 4000-metre runway and a cargo hub.[citation needed] It was built to handle the demand for traffic and to relieve Shanghai Hongqiao International Airport’s traffic. The exterior of Terminal 1 is shaped like a seagull, and has 28 gates, 13 of which are double-decker gates. The capacity of Terminal 1 is 20 million passengers. It currently has 204 check-in counters, thirteen luggage conveying belts and covers an area of 280,000 square metres.[citation needed]

An additional satellite concourse facility to provide further gates and terminal space started construction on December 29, 2015 and was expected to be completed in late 2018. This project will support 38 million passengers annually through 83 departure gates across two S1 and S2 concourses. These will be connected by an underground automated people mover to the current T1 and T2 terminals.[13] It is now set to open in the second half of 2019.[14]

The airport has been using the Airport Collaborative Decision Making system (A-CDM) developed by the aviation data service company VariFlight since January 2017. The system is aimed to improve on-time performance and safety of the airport’s operations. By June 2017, Shanghai Pudong airport recorded 62.7% punctuality rate, which was a 15% increase compared to the same period previous year.[15]

All cars are equipped with racks and space designated for luggage.

Prices are substantially lower than the Maglev. A casual ride to People’s Square, the city center, typically takes just over one hour. It is wise to allow more than five hours for a safe flight transfer at Hongqiao International Airport using public transportation.

The plan for building a new commuter railway line connecting the airport with Hongqiao Airport, Airport Link, has been formally established in 2015 and approved in December 2018 by National Development and Reform Commission. This railway starts from Shanghai East railway station under planning, via Disneyland, Zhangjiang and Sanlin in Pudong, Xujing in Xuhui and Qibao in Minhang. It will use the unused area in Hongqiao Railway Station originally for Maglev for its station at Hongqiao Transportation Hub.