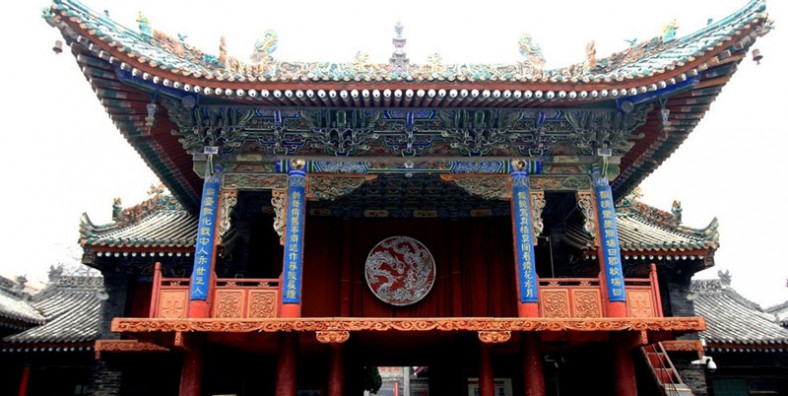 Why is Sanyuan City God Temple So Special?

Built in 1375 during the Ming Dynasty (1368-1644), Sanyuan City God Temple (also called Sanyuan Town God Temple) is located in Sanyuan County of Xianyang City, about 22 miles (36 kilometers) from the city center of Xi’an. This ancient temple is one of the most complete examples of its kind dating from the Ming and Qing Dynasties (1368-1911). It is the shrine of Li Jing, the City God of Sanyuan, originally a famous local general during the Tang Dynasty (618-907). Having stood for more than 600 years, the temple is still regarded as a concentration of magnificence and grandeur. Its long history and a deep cultural heritage combine to demonstrate its value, especially as the Sanyuan County Museum is also located within the temple complex. Cultural relics of the Tang Dynasty and porcelains of other Chinese dynasties displayed in this museum are greatly appreciated by visitors.

With an area of 16,000 square yards (13,390 square meters), the main buildings were erected on a traditional north-south axis. The secondary buildings are equally distributed on the east and west sides of this axis. This symmetrical arrangement is a perfect example of traditional Ming Dynasty architecture.

In Qing Dynasty (1887), in front of the temple’s people accidentally caught fire, and burned the things on both sides of the shops, then Shaanxi governor Ye Boying personally initiated fundraising rehabilitation. In 1942, the Japanese army bombed the city of Xi’an, in Town God’s Temple dropped two bombs, destroyed two of Town God’s Temple temple and temple cangjingge. Hundreds of years of cultural relics collection classic be destroyed on one day spread for hundreds of years, especially the drum music was completely destroyed.

In 1975, Deng Xiaoping, then deputy prime minister, came here to visit and was highly appraised.

In 2006 the government invested eight million yuan to repair the West Street arches and two veranda shops. After ten years of efforts, the administrative committee of Town God’s Temple to overcome the difficulties, raised about thirty million yuan, has repaired the Wenchang Pavilion, door, wing, the life of loyalty and filial piety temple, Temple, Temple of fire, Mary palace, hall and theater.

The front of the temple is on the south side where there is a screen wall with a height of 32 feet (10 meters), and an iron flagpole weighing more than 10 tons. The wall is engraved with an auspicious Chinese design of ‘carps jumping over the dragon gate’. Passing through a magnificent wooden archway with delicate carvings of dragons, phoenixes, and ‘lions playing with silk balls,’ one arrives at the main gate of the temple. This gate, with a height of 50 feet (15 meters), looks mighty and solemn. Being supported by ten pillars but with no beam, the roof is decorated with a pattern of Eight Diagrams.

Constructed in 1757, Lingxing Gate is actually a two-storey tower with a height of 42 feet (13 meters). The north side of the second floor serves as a stage. It was here that many Chinese traditional opera were performed. Nowadays, visitors still have chance to watch some folk performances, such as singing opera and juggling acrobatics during the Mid-Autumn Festival. The west and east veranda of the central yard are exhibition halls which display cultural relics of Tang Dynasty and porcelains of Ming and Qing Dynasties.

A bell tower and a drum tower stand symmetrically on the east and west sides of the central courtyard. Both are 57 feet (17.5 meters) tall and each has 12 pillars in order to bear the weight of their roofs. There is a 10 feet (3 meters) high bell on the second floor of the bell tower. There is also a 5 feet (1.5 meters) diameter drum on the second floor of the drum tower.

In the center of this courtyard stands a spectacular archway, which is the biggest in the whole temple. The design of the top of the arch is brilliant and creative. Abundant carvings add to the beauty of this arch and many depict scenes from famous Chinese legends, such as “Nu Wa Mends the Sky” and “The Eight Fairies”. The top of this archway is engraved with 58 images of little boys with expressions and gestures that are vivid and distinctive.

In the north of the courtyard and facing the arch, there lies the City God Palace, the main palace of the temple. With an area of 837 square yards (700 square meters), this palace consists of the Worship Palace and the Sacrifice Palace from south to north. In the Worship Palace, there are 20 temple paintings which describe Yama and the deepest reaches of hell.  The main subjects of these paintings are figures, animals, birds, flowers, palaces, weapons, tools of torture and monsters.

In the northernmost part of this temple is the Living Palace. This palace covers 833 square yards (697 square meters) with the walls decorated with carved wooden windows. There are some exhibits in this palace that are mainly wooden, stone or copper religious statues of Ming and Qing Dynasties, carved artworks and many other folk handicrafts.

Culture Of City Of God Temple

The believe in city of god has a broad popular base, Town God’s Temple are mostly located in the city center, around Town God’s Temple so often strong incense, waves of believers. The rise of the temple, often become the local folk cultural heritage center, which brings together a variety of local opera and folk arts.

Therefore, in the traditional Chinese society, Town God’s Temple, while carrying the local customs and ethics and spiritual life, often inherited the most primitive cultural traditions in the region, thus becoming the soul of a city’s spiritual culture.

How to get to Sanyuan City God Temple

If you want to get out of the traffic and hassle of navigation, you can book a private tour package that includes visiting, dining and transfer from us. Our local guide and driver will escort you to the Sanyuan City God Temple in the fastest and most convenient way and take care of all the details. You just have to focus on the visiting.

You can take regular bus to Sanyuan County from Xi’an North Passenger Transport Station or Xi’an Long-Distance Bus Station.
You can go to Sanyuan by train from Xi’an Railway Station.
After arriving at Sanyuan, take a taxi direct to the City God Temple.