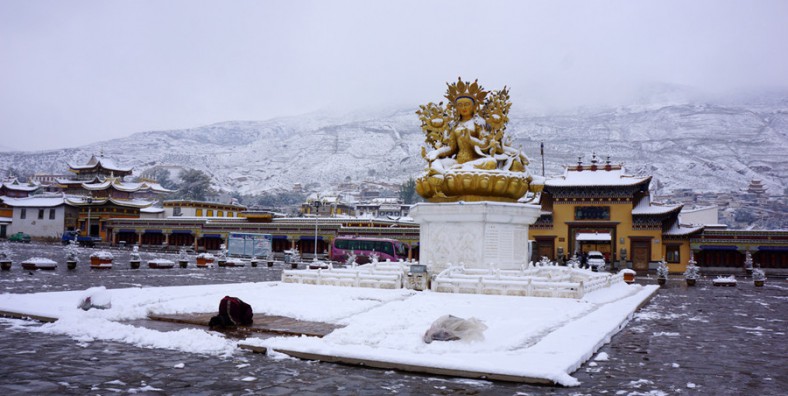 It is a national key cultural relic protection unit. "Longwu" is Tibetan. In Ando region, its scale, status and influence are second only to Labrang Temple in Gansu Province and Kumbum Temple in Qinghai Province.

Why is Rongwu Monastery So Special?

After the restoration of rongwo monastery, rongwo monastery regained its former elegant demeanour. The temple was built on the mountain. The layout was strewn at random and the decoration was magnificent and magnificent. The Grand Sutra Hall is located in the center of the temple, with a construction area of more than 1700 square meters and a circumference of 170 meters. It contains 18 giant columns, 146 short columns, and dozens of statues of Sakyamuni, etc. It is beautifully shaped and solemn. In particular, the statue of Master Zong Kaba is 11 meters high and the circumference of its base is 26 meters. It is gilded with gold and jade gems and is even more resplendent.

Rongwu monastery is located at the foot of Xishan Mountain in Longwu Town, the seat of Huangnan Tibetan Autonomous Prefecture in Qinghai Province. It is located on the middle reaches of Longwu River and has a pleasant climate. It is a national key cultural relic protection unit.

According to “Ando’s History of Politics and Religion”, as early as the 5th year of Yuan Dade (1301), a small temple of Tibetan Buddhism Sakya Sect was built here. By 1426, the local famous monk Samoudan Renqin and his brother Luo Zhesenge repaired and expanded the temple. Samoudan Renqin’s grandfather, Miraj, was born in Danke Rongwu, under the mountain of Tanya in former Tibet. He is a yogi specializing in the Ming Mantra and is good at medical skill. He was sent to Longwu by Baba, the great yuan emperor’s teacher. his son Longqin had been Longwu soil official for many generations. he had nine sons, and his eldest son was Samudan renqin. He became a monk when he was a child, and once worshipped the founder of Xia Qiong Temple (now in Hualong County of Qinghai Province), Dunzhu Renqin, as a teacher, and received the precepts of a monk.

Dunzhu Renqin was also the first teacher of Zong Kaba, the founder of Gelug School. Later, Samoudan Renqin officially completed the construction of rongwo monastery with 100 households in Sajda as donors.

All kinds of fine arts and precious cultural relics are treasured in the temple, as well as the plaque “Hongxiu Miao Wu Guo Shi” conferred by Xuande of the Ming Dynasty and the plaque “Western Region Victory” inscribed by Ming Di for the next five years. There are also many beautifully shaped Buddha statues, murals, heaps of embroidery, Tangka and other works of art, and the vast volume of Buddhist scriptures and books, which have become another Buddhist art museum in the province. The scripture study is based on the Jie Ba Zha Cang tutorial of Sera Temple, and Leng Ben Kang Village is set up in Sera and Gandan Monasteries for monks of the monastery to enter Tibet to study scripture.