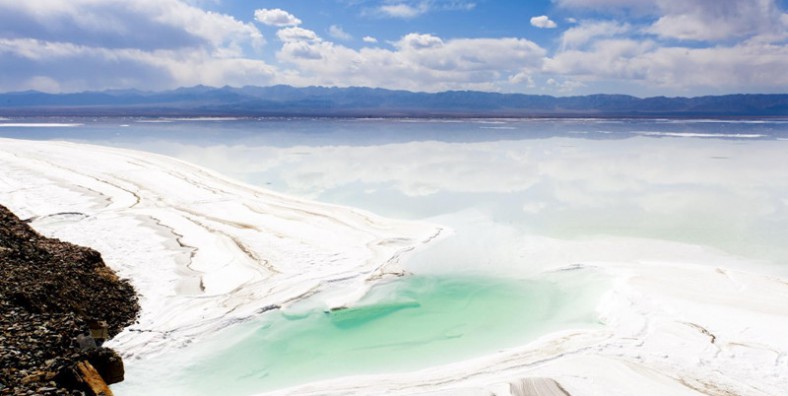 It is one of the four salt lakes in Qaidam Basin. "Tea Card" is Tibetan, meaning salt pond, which is Qinghai salt. "Dabusuannur" is Mongolian and also means salt lake

Why is Chaka Salt Lake So Special?

This natural crystallized saline lake is regarded as the eastern gateway to Qaidam Basin, which reserves the largest salt mine in the world. Lying at an altitude of 3,059 meters (10,036 feet), the lake is oval shape and covers an area of 105 square kilometers (40 square miles), ten times larger than the West Lake of Hangzhou. However, it is the smallest among the several salt lakes in Qaidam area, but different from others for its coexistence of both solid and liquid salt. The snow-white lake bed and the crystal blue water against the azure sky win it the reputation of ‘Mirror of the Sky’.

Where is Chaka Salt Lake

Due to plate movement, the boundary between the Eurasian plate and the Indian Ocean plate, which was originally covered by sea water, gradually rose to the Qinghai-Tibet Plateau. During the formation of the Qinghai-Tibet Plateau, part of the sea water was deposited in low-lying areas, forming many salt lakes and ponds, of which Chaka Salt Lake is one.
About 100,000 to 130,000 years ago, Chaka Salt Lake was an outflow lake, flowing eastward into Gonghe Basin and into the Yellow River. Later, tectonic uplift occurred, making Chaka Salt Lake an inland lake. During the late ice age, Chaka Salt Lake was a fresh water lake. Since Holocene, Chaka Salt Lake began to shrink and salt deposits appeared. Even in the mid-Holocene climate suitable period, Chaka Salt Lake still showed a further shrinking state. In the late Holocene, the shrinkage and salinization of salt lakes further intensified. The role of temperature plays a crucial role in the formation and evolution of Chaka Salt Lake. Compared with the late glacial period, the increase of Holocene temperature caused the evaporation of the Salt Lake to increase much more than the precipitation.

Chaka Salt Lake has the longest mining history (over 3000 years) of all the salt lakes in Qaidam Basin. Due to the huge reserves, mining is not difficult at all, because only by uncovering the top layer of the lake can natural salt be obtained. Today, large-scale mining is done mechanically. Many grades of salt are sold in China and even exported to Japan and Nepal.

The climate around the lake is dry and cool. Even in midsummer, the average daytime temperature is only 19.6 degrees Celsius (67 degrees Fahrenheit) and the average annual rainfall is 210 millimeters (8 inches). The surface area of this lake is greatly affected by seasons. It may reach 105 square kilometers (40 square miles) in the rainy season and decrease in volume in the dry season.

There is a rock salt layer at the bottom of the lake, with the thickest part reaching 15 meters (16 yards), with an average of 5 meters (5.5 yards). The extracted brine will recrystallize into rock salt layer in a few years, and there is a large amount of brine in the lake, which is inexhaustible! Salt grains are of high quality and can be eaten after processing. The storage of salt has now reached about 5 million tons, which is said to last for 85 years in China with a population of 1.4 billion.

After entering the scenic spot, the lake was littered with many giant sculptures. These are formed by the deposition of salt and brine over a long period of time. They are affectionately called the luxurious art of land. Tourists can swim or lie on the lake without wearing lifebuoys or life jackets. A large amount of salt and minerals accumulate in the lake for a long time, with buoyancy eight times higher than that of seawater, almost the same as that of the Dead Sea.

Beautiful sunrise and sunset scenery is highly recommended. The best time to visit is from July to August. It is believed that with the summer breeze, inhaling moist air with high salt content is especially beneficial to the lungs.

There is a long railway extending to the center of the lake. Tourists can walk along the runway and watch the magnificent scenery on the water. The spectacular mining scene of the large-scale modern salt dredger left the deepest impression.

You can take a taxi from the county seat to within 10 yuan or walk there.

One thought on “Chaka Salt Lake in Haixi, Qinghai”