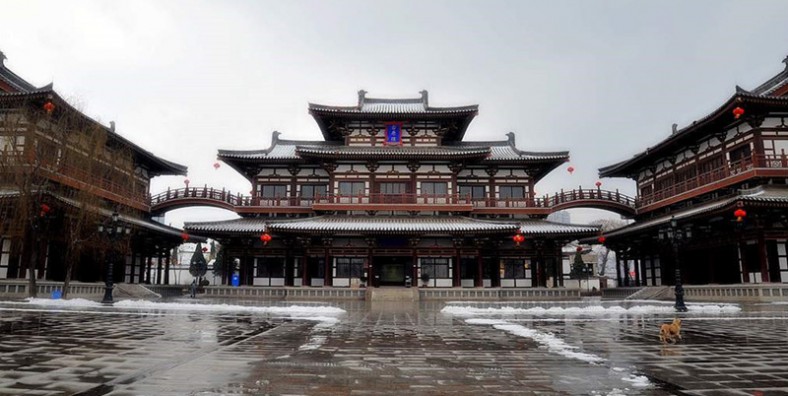 Qinglong Temple in Chinese, from about 6 kilometers that located the highland of the suburb southeast of Xi'an City. It was initially established on the second year of Sui Dynasty, the name then was Linggan Temple, means Temple of Inspiration. The name Qinglong Temple was changed later in 711 of Tang Dynasty.

Why is Qinglong Temple in Xian So Special?

Brief Introduction of The Qinglong Temple

Qinglong Temple, also known as the Green Dragon Temple, is located in the southeast of the ancient city of Xi’an, only 1.5 km (about one mile) away from the Big Wild Goose Pagoda. It is a famous Buddhist temple with ancient architectures and a Cultural Relics Museum. In the mid-Tang dynasty (618–907), Huiguo taught Vajrayana at the temple, his Japanese disciple Kūkaiintroduced it to Japan, since then, Qinglong Temple became the cradle of Vajrayana of both Chinese and Japanese Buddhism. Qinglong Temple was completely damaged in 1086 during the Northern Song dynasty (960–1127) and gradually it became unknown to public, the nascent version was completed in the 1980s with Tang dynasty architectural style.

The Qinglong Temple (Green Dragon Temple) was a famous temple of the Tang Dynasty (618-907). It was known as a place where Buddhist monks were trained, and it was a favorite destination in China for Japanese monks to learn Buddhism. The temple’s history is well known in Japan because a Japanese monk named Kukai studied there and brought back his Buddhist teachings to Japan in the year 806. His influence was part of what made Buddhism popular in Japan. The original temple was destroyed, but a new one was built in 1963. The temple and the surrounding garden and halls are a favorite attraction for Japanese tourists who much appreciate the cherry trees that bloom between about March to May depending on the year’s climate. So if you go there when the cherry blossoms are blooming, you’ll likely see Japanese tourists. Beside the Green Dragon Temple, you can see a recently-built monument to the Japanese monk Kukai, exhibition halls, some remaining Tang-era monuments, and beautiful cherry trees.

During the Tang Dynasty era, Xi’an was the capital of the Tang Empire, and Buddhism that was taught by Western Asian travelling monks was reestablished in the empire to be a major religion. The Western Asian monks taught a kind of Mayahana Buddhism that had developed there during the centuries before north of India. They travelled along the Silk Road eastward, and settled and taught in Xi’an. Many temples were built, and at the time, the Qinglong Temple was considered relatively small and unimportant, and it is said that the monks had little influence on Buddhism in the Tang Empire or afterwards.

But the monastery had a big impact on Japanese religion. A monk named Kukai (774-835) travelled around to look for a teacher who was willing to teach him some of the teachings of the Central Asian monks. He found a monk named Huiguo at the Qinglong Si who had studied under a famous travelling monk named Amoghavajra (705-774) who had been influential. At the temple, Kukai and other Japanese monks studied the scriptures and the system of rituals. Kukai returned to Japan in 806, and was very influential there. In 824, he was appointed to be the chief architect of the imperial Buddhist temple at Toji in the new capital city that the emperors were building. After that, he became tutor to the crown prince. His “Shingon” teachings became very popular and had the support of the emperors of the time.

Green Dragon Temple is a place where the cherry blossoms can be enjoyed. Every year during May and June, an endless stream, of tourists comes to appreciate its beauty. Located North-East of the Big Goose pagoda, this 1500-year-old temple has strong ties with Japanese ShingonBuddhism. The big reason you’ll come here, however, is the cherry blossoms. There are both Japanese and Chinese cherry blossoms on their grounds, and now’s the time when they’re in full bloom. Their sakura festival has been going on since mid-March, but take it from us, now’s the time they’re going to look their best. Also, this is one of those things that, like, every local knows about but foreigners never talk about, so if you’re planning to go on a weekend, either go early or expect to wait in lines for a while.

Enter by the east gate, and you will find the Cultural Relics Museum to your right. This three-storey museum displays cultural relics unearthed in the temple as well as those appertaining to the Sino-Japan relationship. Two paintings named “Ancient Qinglong Temple” and “Across the Sea to Tang China” respectively, are quite valuable.

To your left are special buildings. The first one you will encounter is Kukai Monument, which was erected in 1982 in memory of Kukai. This 32-foot monument is made of bluestones and white marbles with five stones from Japan on its top. On the west of the monument is Feiyun Pavilion, fronting the Qinglong Spring. Keep walking west for a few minutes and you will see the Hui-kuo & Kukai Memorial Hall, where sutras transcribed by Kukai, portraits of Kukai and his mentor Hui-kuo and other relics are kept. Also, the Poem Tablet can be found in the temple. On this one can see a brief introduction to Qinglong Temple, sculptures of Kukai, and oft-quoted poems written by eminent poets during past dynasties on their visits to the temple.

How to get to The Qinglong Temple

If you want to get out of the traffic and hassle of navigation, you can book a private tour package that includes visiting, dining and transfer from us. Our local guide and driver will escort you to the Qinglong Temple in Xi’an in the fastest and most convenient way and take care of all the details. You just have to focus on the visiting.