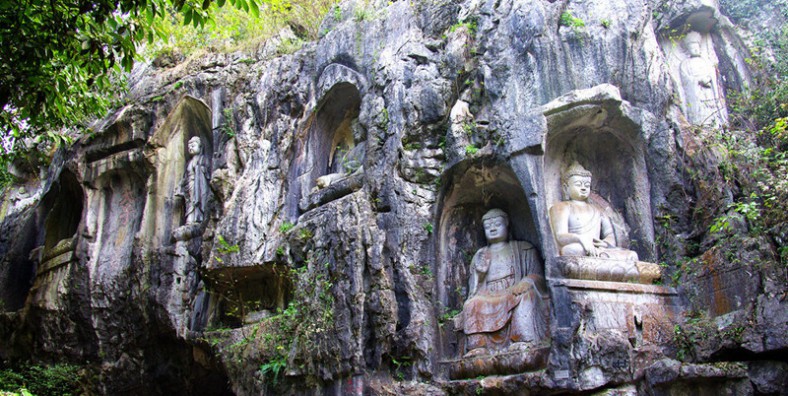 Peak Flown From Afar (Fei Lai Feng, Ling Jiu Feng), stands next to Lingyin Temple and is a must-see in Hangzhou, Zhejiang Province. There are many legends about the peak's name.

Ticket:CNY 45 (extra CNY30 should be paid for Lingyin Temple inside the spot)

Why is Peak Flown From Afar (Fei Lai Feng) So Special?

Fei Lai Feng (Flying Peak) – literally translated as ‘Peak Flown from Afar’ – is a unique, 200-meter tall limestone peak located next to the Lingyin Temple in Hangzhou, Zhejiang Province. At the site, ancient tree roots rise above the ground, their branches twisting and winding up the peak. Due to erosion, there are a large number of caves within the mountain, and some of these feature intricately carved Buddha statues that were created during the Song and Yuan dynasties.

Story One: There are many legends about the peak’s name. A well-known legend states that an Indian monk named Huili arrived in the valley 1,600 years ago and was surprised to see a peak so dissimilar from any other one in the valley. He believed that the peak had flown over from India because the shape, although unique in China, was common in India. However, he did not know why the peak would have flown to this spot so far from his country. Hence the peak’s name was created and has passed down to the present day.

Story Two: It was said that one day, Monk Ji Gong (济公, also called Dao Ji) of Lingyin Temple suddenly predicted there would be a peak flying from afar. At the time, the front of Lingyin Temple was a village. Monk Ji Gong was worried about the arrival of the unknown peak would cause casualty and he ran to the village to warn the villagers of what might happen and advised them to leave as quickly as possible. Ordinarily, in the eyes of villagers, Ji Gong acted like a mad monk and preferred to play tricks on them. They mistook Ji Gong’s advice as a trick again; hence nobody took it seriously, which made Monk Ji Gong worried. At this time, He rushed into a family where there was a wedding ceremony and took the bride rapidly out of the house. The villagers found the monk dared to get the bride away from the ceremony and hell-for-leather went after him. Suddenly the gale begun and the whole sky turned dark when they were chasing Ji Gong, and with a sound of Hong, a peak fell down to the front of Lingyin Temple. And the peak did not destroy the village at all. The villagers got aware that Monk Ji Gong saved them all. And this peak was Fei Lai Feng, the Peak Flown From Afar.

In the caves and cliffs of peak, there are also more than 470 Buddhist stone statuses dating from Five Dynasties Period (907A.D. – 960A.D.) to Yuan Dynasty. Among all these carvings, the biggest one is Laughing Buddha with Big Belly carved during the . It is the earliest statue of Buddha with Big Belly in China. It is sited on a cliff along the brook, laughing since the North Song Dynasty (960-1127). There is also a carving of King Da Li Ming with three heads, eight arms and stripping to the waist, with colorful crown on his head and a pearl and jade necklace hanging on the neck, very impressive.

While sightseeing on the Peak Flown From Afar, the experience is one that combines a climbing, trekking, and walking sightseeing adventure. For Buddhist devotees, the tour is also a spiritual pilgrimage set against the backdrop of Hangzhou’s attractive natural beauty. The Peak Flown From Afar is right next to the Lingyin Temple, which is a famous Buddhist temple around this area, so after exploring the limestone hill, you can also visit the temple.

How to get to Fei Lai Feng in Hangzhou

If you want to get out of the traffic and hassle of navigation, you can book a private tour package that includes visiting, dining and transfer from us. Our local guide and driver will escort you to Fei Lai Feng in Hangzhou in the fastest and most convenient way and take care of all the details. You just have to focus on the visiting.