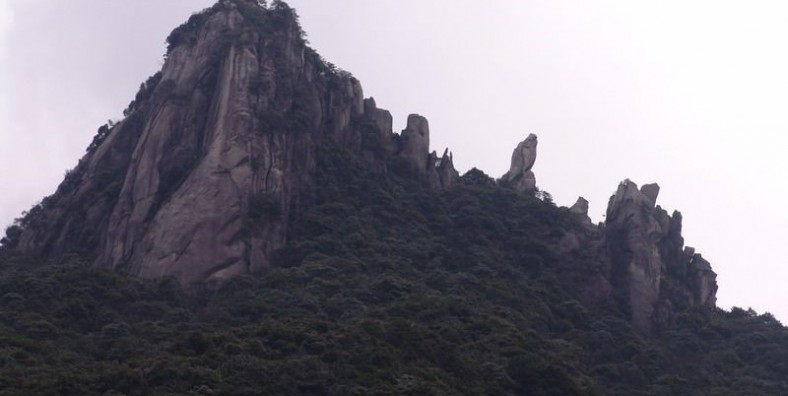 There are many strange stones on the gorge, such as blue lotus, liger, bats and cattle herd, which are named after them. At this point, the Lijiang River has cleared away, turning sharply at a 90-degree bend, and the water flow is divided into two parts.

Why is Ox Gorge & Wangfu Rock So Special?

If you take the Lijiang River cruise from Mopan Dock or Zhuhe Dock, the first scenic spot you will encounter is a narrow gorge called Niuxia. It is located on the west bank of Lijiang River, about 30 kilometers (18 miles) from Guilin city. The adjacent peaks extend far away, many of which are like cattle. Therefore, this canyon is nicknamed Cow Canyon. Pass by Ox Gorge and you will see Wangfu Hill, whose name ‘Wangfu’ literally means looking into the distance and yeaning for one’s husband’s return. On the hilltop is a rock resembling a man in the ancient costume looking northward, whereas at the hillside is another rock in the shape of a woman gazing far for her husband, with a baby on her back. These two rocks form the attraction spot ‘Wangfu Rock’. On the east of the hill is Doumi Shoal. Doumi means a hod of rice (ho d is a wood grain container with a capacity of 18 pints). Following is a moving story about the history of the rock and the shoal.

Where is Ox Gorge & Wangfu Rock

On the west bank of Lijiang River, south of Mopan Mountain, it is separated from Biya by the river, about 30 kilometers away from Guilin. There are many strange stones on the gorge, such as blue lotus, liger, bats and cattle herd, which are named after them. At this point, the Lijiang River has cleared away, making a sharp 90-degree turn. The current split into two, slamming on three continents and rolling south.

A long time ago, the surging water beat against the steep cliff with great momentum. However, after several dredging and reconstruction, the water became calm, and the widened eastern branch is now the mainstream of the river. A popular ballad fully describes the scenery of Niuxia, saying that a group of peaks face three small islands floating on the endless water. The river is divided into two tributaries and countless ships flow along the eastern one. If you look carefully, you will find that the pattern on the cliff looks like a few lucky bats, with their wings outstretched and their heads tilted to the left. Since bats are regarded as auspicious animals in Chinese culture, you will certainly embark on a lucky journey. On another cliff, stalactites hung, bowed their heads and drank water like dragons, hiding their bodies. This is vividly called dragon playing with water. There is a legend that the dragon was sent by the emperor of heaven to collect the fragrance of osmanthus on the cliff. However, they were attracted by the beautiful scenery. Instead of doing so, they brought rain and dew from heaven to this place. Then they poured dew from the sky and sweet osmanthus essence into the water under the cliff, giving the place a beautiful name-Chen Xiangchi, which means essence sinks into the water.

The local people have many stories to express their love for Lijiang River scenery. One of them said that the boat ran aground when a young couple passed by with their children. Unfortunately, they have nothing but a bowl of rice. At that time, an old lady in rags came to beg for food. They were so kind and compassionate that they gave the woman rice and starved themselves. My husband climbs mountains every day to see if there is a boat passing by and will help them. One day, after walking for a long time, a worried woman climbed up to look for him, only to find her husband starved to death and turned into a stone on the mountain. She was so sad that she also turned into a stone to accompany her husband forever. In memory of this loving and kind-hearted couple, the locals named the shoal where their ship docked Mi Dou Shoal, and named the two rocks Immortal Rock and Wang Fu Rock. Hearing this story, perhaps you are so moved that you prefer picturesque scenery.

Take a Li River cruise from Guilin to Yangshuo and you will pass by Ox Gorge and Wangfu Rock in about an hour.