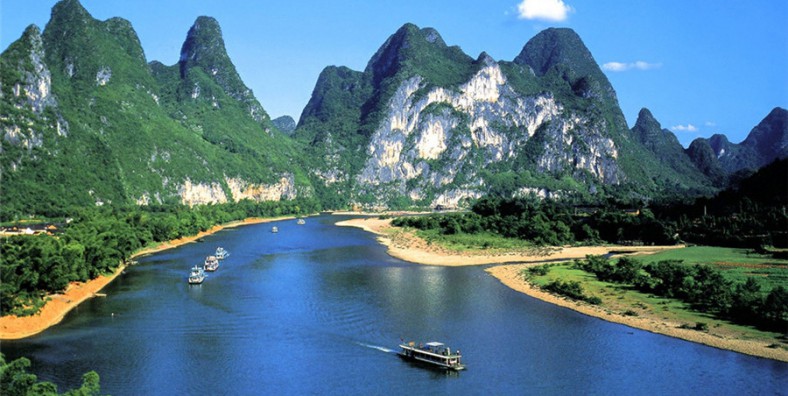 She stands by the river, the rock walls are as sharp and the scenery is charming. Jiuma Paints the Canyon Drifting at the foot of the Mountain is one of the best in the world, with a distance of 300 meters from the Lijiang River. The unique design of the drifting river makes tourists swim in the painting like a boat in wonderland.

Why is Mural Hill So Special?

Mural Mountain, also known as Jiuma Mural Mountain, is a scenic spot that you will never miss if you visit the Lijiang River. It is located on the west bank of Lijiang River, about 60 kilometers (37 miles) away from Guilin and near Xingping Town. Facing the wide and calm waterway is a huge and steep cliff, which looks like a huge color screen. Mural Mountain is backed by mountains and consists of five peaks. It is an aggregate of yellow, white, black, gray and green weathered rocks. From a distance, the mottled cliff surface looks like a huge mural with nine horses in different postures.

Where is Mural Hill

Jiuma Painting Mountain is one of the famous sights of Lijiang River in Guilin, which is located 4 kilometers upstream of Xingping River. Linjiang and stand, rock such as cutting, looking like a huge picture screen, rock cutting wall screen stand, more than one hundred meters high and wide

This mountain is called Nine Ma Huashan in Chinese, which means a mural mountain with nine horses. According to a legend, the nine horses were raised in heaven and cared for by the fictional character Sun Wukong in Chinese classical literature. However, Sun Wukong is not satisfied with his work. He often goes back to Huaguo Mountain, where he lives on the earth, leaving Tianma unattended. On one occasion, nine of them fled to the world. They walked briskly in the green mountains, where there were clear water and blooming flowers. They liked the scenery very much and never went back. Later, they had to hide in a cave to avoid the gods sent by heaven to bring them back. Unfortunately, the horses were discovered by God when bathing in the Lijiang River at dawn. They fled hastily and ran to the edge of the cliff, where they became stone statues as punishment for not coming back.

Another legend is that a painter who wanted to paint this picture saw nine horses drinking water in the Lijiang River. As a result, the horse was frightened and ran into the cliff in a hurry and confusion. No matter how incredible these legends sound, they add mystery to the charming scenery and make people more fascinated by the magical work of nature.
Horses have different attitudes. One image may be a running horse, while the other image may be standing still, neighing, eating grass or drinking water. It is not easy to identify all nine horses because it requires keen eyesight and rich imagination. A folk song claims that the person who can identify all nine horses will be the first scholar and the first person to come out of the highest imperial examination in ancient China.

Former Chinese Premier Zhou Enlai also visited the place in the 1960s and was reported to be able to identify all nine horses. When General Chen Yi asked Zhou how many horses he could recognize, Zhou said it was 18. Do you know why there are 18 of them? That’s because nine horses are on the wall and the others are reflecting on the water.

Behind the mural mountain is a canyon suitable for drifting. There is a drop of 180 meters (590 feet) and the whole route is 3.5 kilometers (about 2.2 miles) long, like a ribbon winding through the valley. Of course it is very interesting to ride an inflatable raft in the torrent!