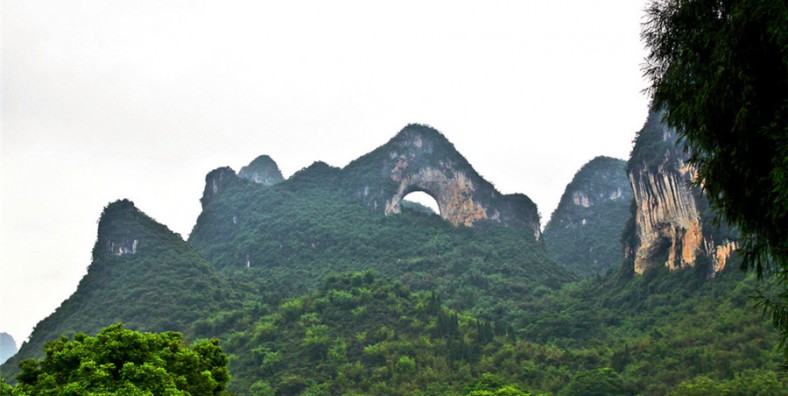 Because there is a big hole through the top of the mountain, like a bright moon, high and bright, so people call it the moon peak, commonly known as the moon mountain.

Why is Moon Hill So Special?

There is a natural big stone arch on the mountain top, which runs through both sides and looks like the bright moon in the sky from afar. Seen from different angles, the shape of this hole is also constantly changing. If you are driving a car to admire the moon mountain, the shape of the stone arch will gradually change from the curved first-quarter moon to the half moon, the full moon, and then to the second-quarter moon, which is very wonderful.

Where is Moon Hill

Moon Mountain is located at the end of Shili Gallery scenic spot in Yangshuo County, Guilin City, Guangxi Zhuang Autonomous Region. The scenery here is simple and elegant, quiet and comfortable. There is a natural big stone arch on the mountain top, which runs through both sides and looks like the bright moon in the sky from afar. Seen from different angles, the shape of this hole is also constantly changing. If you are driving a car to admire the moon mountain, the shape of the stone arch will gradually change from the curved first-quarter moon to the half moon, the full moon, and then to the second-quarter moon, which is very wonderful.

Yangshuo County has long been a popular destination for rock climbing. It enjoys about ten climbing places and over 900 climbing routes. Annual Yangshuo Climbing Festival is the grandest of its kind in China and even in Asia, attracting thousands of climbers from home and abroad. The Moon Hill is one of these sought-after climbing places. The climbing site is at the hilltop and it takes nearly twenty minutes to reach it. In total there are 15 routes. The first route was pioneered by the American climber Todd Skinner in 1992. And the route no. 14, as long as 30m (100 feet), is one of the most demanding natural rock climbing routes in China.

The Moon Mountain is reputed as one of the world’s famous mountains, fairy mountain and Lingshan mountain. The 800-grade climbing road paved with marble can reach the Moon Palace. The moon palace is about 50 meters high and wide, with many milky stones inside, like Chang ‘e and Yu Mian, which is consistent with the myth of the Guanghan Palace. Seen from different angles of the moon viewing road below the mountain, the full moon, half moon, eyebrow moon and other different shapes can be seen. In just a few minutes, you can see the dynamic landscape of the change of the moon’s brightness and brightness, which can also be regarded as a wonder in Yangshuo County. There are beauty dressing, Crouching Tiger Mountain, Jiuniu Ridge and other scenic spots around Moon Mountain.

The hill is 230 meters (756 feet) high and looks like a huge screen. There is another mountain behind the moon mountain as a reference, and you will find that the moon changes from a new moon to an old moon and then to a full moon. On the front of this mountain is Li village, which opens the way for tourists to enjoy the moon. Walking along the path, you will appreciate the ups and downs of the moon. This village is also the best place to take long-term photos of the Moon Mountain.

800 marble steps lead tourists to the “moon palace” on the top of the mountain. In this huge palace with a diameter of about 50 meters (55 yards), you will find a smooth wall and various stalactites hanging from the ceiling. Local people think that the three of them look like fairy Chang ‘e, jade rabbit and woodcutter Wu Gang. On a clear day, the blue sky and white clouds form a wonderful background against the cave. On the night of Mid-Autumn Festival, people will light lanterns made of grapefruit on the grassland at the foot of the mountain and put them into the Lijiang River at midnight to express their best wishes.

The Moon Hill is only 8km (5 miles) away from Yangshuo County and you can reach it by many ways.