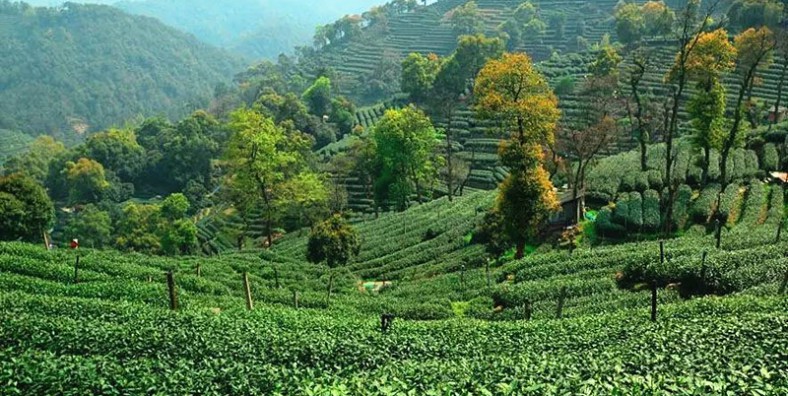 Meijiawu is an ancient village with a history of more than 600 years. As an important and the largest production base of Longjing Tea in Hangzhou, there are 500 households living in the village. The tea plantation covers an area of more than 800,000 square meters.

Recommended Visiting Hours: about half a day

Why is Meijiawu Tea Plantation So Special?

Hangzhou’s Meijiawu Longjing Tea Plantation/Village is a famous Dragon Well tea plantation nestled in the hills surrounding West Lake. It is renowned as one of the most important production bases of West Lake Dragon Well tea in China, and possibly even the world.

Meijiawu Tea Culture Village, located in the west of the world-known West Lake and hailed as “ten miles Meiwu” for its vast area along the Meiling Road, is an ancient village with a history of 600 years. Inhabited by more than 500 households, Meijiawu Tea Culture Village is picturesque surrounded by mountains and waters; it is a main production base and a protected area of the fragrant West Lake Dragon Well Tea, and a leisure tourist spot featured with tea culture in farm style. It has obtained many a title, such as “A landscaping village in Hangzhou”, “Civilization Village”, “Patriotic Education Base in Zhejiang Province”, “Hangzhou Top ten agricultural demonstrated area”, “National agricultural tourism scenic site”, and the like.

Actually, Meijiawu village used to be unknown for a long time. Zhou Enlai, a former Chinese premier, brought attention to the area after a visit. Later, it was set up as one of the attractions for international visitors and has received more than 100 international celebrities and heads of state.  Now, you can still see Wufu Bridge and a memorial hall in Meijiawu Tea Plantation built in memory of Zhou Enlai. Now, as a key attraction in Hangzhou, Meijiawu Tea Plantation has become a peaceful leisure place.

There are about 160 tea houses in the village. When there are visitors, they will introduce to them the history of tea, process of making tea and the functions of tea. In addition, there are also tea ceremonies. Every spring, visitors can pick tea leaves by themselves, learn tea culture and experience the rural life of tea farmers.

Tea produced at Meijiawu is of top quality of all the West Lake Longjing Tea. Every year there are four tea-leaves picking periods, based on the solar terms. The first period is right before Qingming (Pure Brightness, April 4 or 5), the second period is before Guyu (Grain Rain, April 19-21), the third period is during Lixia (Beginning of Summer, May 5 or 6), and the last period is one month after Lixia.

The tea dishes prepared at Meijiawu Tea Village feature light, fresh, smooth and slightly salty flavors. The tea dishes like Longjing Tea with shrimp, Biluo Tea with shrimp, Longjing fish slices and other dishes are the specialties. Recently there are some new dishes launched to meet the different tastes of visitors, such as carp soup with fresh tea water, tea water with crisp shell chicken and tea water with duck stew.

The best time to visit Longjing tea village is March to May. March and early April is the time for picking tea leaves. During this period, all the farmers are busying themselves with the work in their tea fields. If you come to Meijiawu Tea Plantation during this time, you can join and pick up tea leaves!

After picking up the leaves, they will start to make new tea. When you walk to the village during this time, you will be surrounded by the special smell of fried tea. If interested, you can walk into their houses and try making tea yourself.

Later in April and May, the new Longjing tea has just been made and it’s a great time to visit and buy some.

Although it’s a great time to the village from March to May, you should notice that the traditional Qingming Festival happens around early April, which brings a peak tourist time to Meijiawu Tea Plantation. We suggest that if you want to avoid the crowds, skip this time of year.

How to get to Meijiawu Tea Plantation

If you want to get out of the traffic and hassle of navigation, you can book a private tour package that includes visiting, dining and transfer from us. Our local guide and driver will escort you to Meijiawu Tea Plantation in Hangzhou in the fastest and most convenient way and take care of all the details. You just have to focus on the visiting.