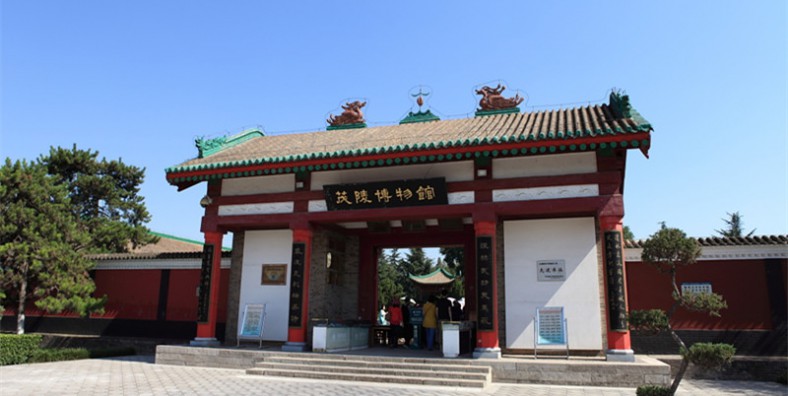 Maoling Mausoleum is the tomb of Emperor Wu of Western Han (156 – 87 BC). As the largest tomb of all the tombs built during Han Dynasty and with its rich funeral objects, Maoling Mausoleum is called the "Chinese Pyramid". Maoling Mausoleum is located 40 kilometers from Xian. It took 53 years and cost a third of the taxes during that historical period to complete the construction of the mausoleum.

Why Visit The Maoling Mausoleum?

Where is The Maoling Mausoleum？

The tomb of Emperor Wu of Han – Liu Che (157 BC – 87 BC), Maoling Mausoleum is located about 40 kilometers (about 25 miles) away from Xi’an City. The exact location is Maoling Village, Nanwei Township, Xingping County, Xianyang City, Shaanxi. This mausoleum is called ‘the Chinese Pyramid’ since it is not only the largest but it also held the richest burial contents of all the mausoleums of Emperors constructed during the Western Han Dynasty (206 BC – 24 AD), and took the longest time, 53 years, to build. As the largest tomb of all the tombs built during Han Dynasty and with its rich funeral objects, Maoling Mausoleum is called the “Chinese Pyramid”.

Liu Che was the fifth Emperor of the Western Han Dynasty. He was a great feudal Emperor who can parallel Emperor Qin Shi Huang – the founder Emperor of the Qin Dynasty (221BC – 206BC). During his 54-year reign he exerted himself to make the country prosperous by consolidating and strengthening the unification of many nationalities. With his great talent, he made the Western Han Dynasty’s power reach the highest peak and also opened the famous Silk Road.

Maoling is the largest in a group of more than 20 tombs. The smaller tombs surrounding it belong to former members of Emperor Wu’s court, such as Lady Li, the emperor’s favorite concubine, and the military strategist Huo Qubing (died 117 BCE).

The town of Maoling was created during the construction of the tomb. The artefacts found in Wu’s tomb are now in the Maoling Museum. The museum exhibits 4,100 cultural objects and 14 historical relics. The golden horse of Maoling, the largest gilded horse ever found in China, was discovered in 1981 by farmers in a field nearby the mausoleum.

Some 40 km away from Xi’an, the Maoling Mausoleum Museum is a landscape-style museum displaying the dynastic history of the Western Han Dynasty (206BC-24AD) of China in all dimensions. Located in the front of the mausoleum of General Huo Qubing, the museum has now 2 cultural artifacts exhibition rooms, 1 hall telling the story of Emperor Hanwudi, and 6 bungalows for carved stones.

Being the first administrative institution devoting itself to protecting the cultural relics of the dynasty, the museum is famous for the mausoleums of Emperor Hanwudi and General Huo Qubing, the large-sized stone sculptures of animals, and rich and precious genuine exhibits.

In the two main exhibition halls you can see rare cultural relics and get general information regarding politics, economy, military, and foreign affairs that were relevant to the Han Dynasty in China’s history. In total some 4,100 cultural relics, 14 national level treasures have been discovered. Some of these truly unique and precious cultural relics, including the Gilt Bronze Horse, the eaves tiles with characters on them and the stone tiger sculpture, have now been exhibited in many countries and regions and have been well received with huge enthusiasm.

How to get to Maoling Mausoleum

If you want to get out of the traffic and hassle of navigation, you can book a private tour package that includes visiting, dining and transfer from us. Our local guide and driver will escort you to the Maoling Mausoleum in Xianyang in the fastest and most convenient way and take care of all the details. You just have to focus on the visiting.

– Depart from Xi’an: take a coach leaving for Xingping County at the West Bus Station, get off at Fujiaqiao Lukou (Fujiaqiao Intersection), then wait there for bus No.11 (兴平Xingping – 定周Dingzhou), get off at the gate of the Maoling Mausoleum Museum.