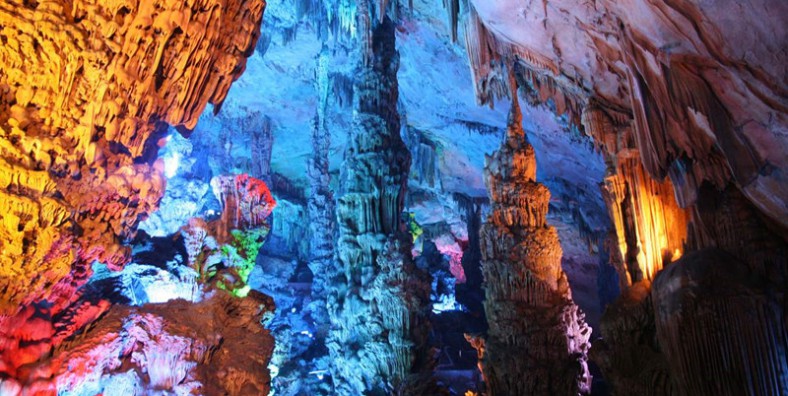 It is a scenic area with caves as its main attraction and landscapes as its auxiliary attraction.  The reed flute cave cave is 240 meters deep and runs 500 meters.

Why is Reed Flute Cave So Special?

Reed Flute Cave is a brilliant karst cave with marks on almost all tourist routes. Its name comes from the green reeds growing outside it. People use reeds to make flutes. In fact, this cave eroded by water is a spectacular world with various stalactites, stone pillars and rock formations formed by carbonate deposits. Under the illumination of colored lights, this wonderful spectacle has many variations. Walking through the dense stone pillars, tourists can see the changing scenic spots and feel that they are in the paradise where the gods live.

Where is Reed Flute Cave

There are two kinds of strange stalagmites: one is like a snowman. Because of the cold, he put his hand in his pocket. The other is like a round tower-shaped pine tree, with a thick layer of ice and snow on its branches.

“Crystal Palace” is the widest part in the Reed Flute Cave. This is a bright hall, and the heights around it are dropping. Stalactites hang in four directions, just like a series of lanterns decorating the hall. Under the action of light, some stalagmites look like jumping fish.

Leaving Crystal Palace, several narrow alleys appeared in front of tourists. According to Chinese myths and legends, this is the place where Monkey King, the main character in Journey to the West, fought with many subordinates of the Dragon King to acquire his powerful weapon, the Sea Magic Needle.

Inscriptions on the Cave Wall

Despite the charming natural scenery inside the flute cave, there are still many works on the wall. According to statistics, 77 travel notes and poems are said to have originated from the Tang Dynasty (618-907), making the cave a popular tourist attraction at that time.

How was the Reed Flute Cave formed?

Reed flute cave is suitable for sightseeing all the year round. April to October is the best time to travel. reed flute cave is located in Guilin, Guangxi. It has a subtropical monsoon climate with mild climate, long summer and short winter, abundant annual precipitation, abundant sunshine, an annual average temperature of 19 degrees, sufficient light, a mild season, no severe winter and no extreme summer. Of course, you must pay attention to the weather changes when traveling, so as not to be affected.