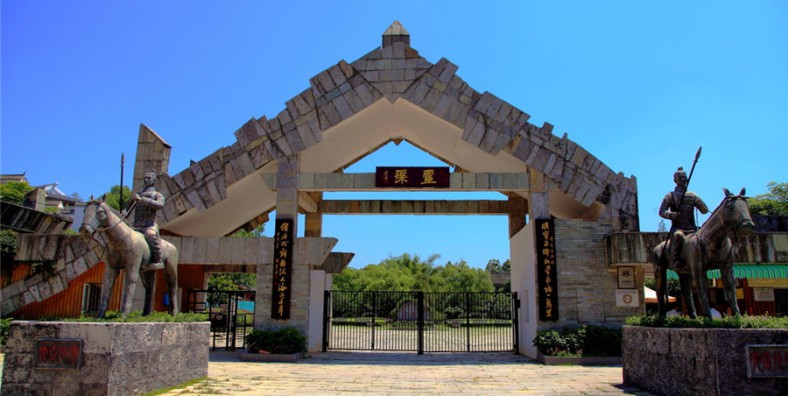 As the oldest canal all around the world, it is evidence of China's innovative technologies in ancient times. The canal connects the Xiang River and Li River, and consequently links the Yangtze River and Pearl River systems, creating a critical waterborne transportation hub. Meanwhile, it plays an important role in terms of irrigation.

Why is Ling Canal So Special?

The Lingqu Canal, also known as Ling Canal or Magic Canal, is located in Xing’an County, near Guilin, with an overall length of 36.4 kilometers (22.6 miles). As the oldest canal all around the world, it is evidence of China’s innovative technologies in ancient times. The canal connects the Xiang River and Li River, and consequently links the Yangtze River and Pearl River systems, creating a critical waterborne transportation hub. Meanwhile, it plays an important role in terms of irrigation. Lingqu Canal along with Zhengguo Canal in Shaanxi Province and Dujiangyan Irrigation System in Sichuan Province are the “three great water conservancy projects of ancient China”.

Where is Ling Canal

It is a national key cultural relic protection unit, located at the edge of Xing ‘an County, with a total length of 34 kilometers. It was built in the 33rd year of Qin Shihuang (214 BC) and has a history of more than 2,000 years. It is also called the three major water conservancy projects in ancient China together with Dujiangyan and Zheng Guoqu.

In 221 BC, Qin Shihuang (221-207 BC) unified the six countries and established a new country. In order to attack the Baiyue tribe in southern China, he sent 500,000 troops to attack it. However, the army was repulsed and stationed at Yuecheng Mountain in northeastern Guangxi. This mountain hinders the transportation of important military supplies. In order to overcome this, Qin Shihuang ordered the construction of Lingqu to create an efficient water supply route. Chief designer Shilu led 100,000 soldiers to build the mountain-crossing canal, which was completed in 214 BC. Shortly thereafter, Baiyue was conquered, thus completing the unification of the Qin Empire

The main design feature of Lingqu is to raise the water level of Xiangjiang River by using the weir flower nozzle in the shape of a plow. The weir further directs one river (today’s South Canal) to the upper tributary of the Lijiang River and another larger river to meander into the Xiangjiang River through a canal (today’s North Canal). Huazui is surrounded by stone dykes on three sides and small scales on one side. Xiaotianping is part of the bank of the South Canal and is 124 meters (407 feet) long. In addition, there is a large balance, about 380 meters (1247 feet) long, which is part of the North Canal. The large balance weight and the small balance weight form a V-shaped diversion dam, which reduces the impact of water flow. If the water level drops, they can supply water to the canal to raise the water level and ensure the smooth progress of the ship. On the contrary, when the water level rises, the dam can direct the water to the Xiangjiang River to protect human beings and crops from floods. Large balance and small balance effectively regulate water flow, which is why they are called balance. Another highlight is 36 bucket doors, or ancient locks. Doumen is the earliest ship lock in history and is known as the “originator of ship lock”. It is used to raise and lower the water level to facilitate navigation.

Lingqu was originally used for military purposes and later became a civilian waterway, which has important cultural significance. In order to commemorate the four outstanding government officials who made great contributions to the construction and renovation of the canal, four shrines of the wise were built. These four people include: the designer of Shilu, Lingqu and the person in charge of the project; General Ma Yuan of the Eastern Han Dynasty (25-220) dredged the canal to improve its shipping capacity. Tang Dynasty (618-907) governors Li Bo and Wei Meng strengthened the dykes and improved the infrastructure. In addition, there is also a Qin culture square where stone replicas of a series of weights and coins issued after the unification of the Qin empire can be seen. In the middle of the square stood a pot with two ring handles carved out of stone. It is said that after Shi Lu successfully built the canal, Qin Shihuang gave his hip flask to Shi Lu, and the hip flask on the square was built to commemorate this event.

Xing an has formed a water street scenic spot along the 1 kilometer long (1,000 yards) canal. This street is full of Qin and Han styles, including ancient bridges, stone carvings and pavilions. Tourists can enjoy a completely pleasant trip to Qin and Han culture in the street.