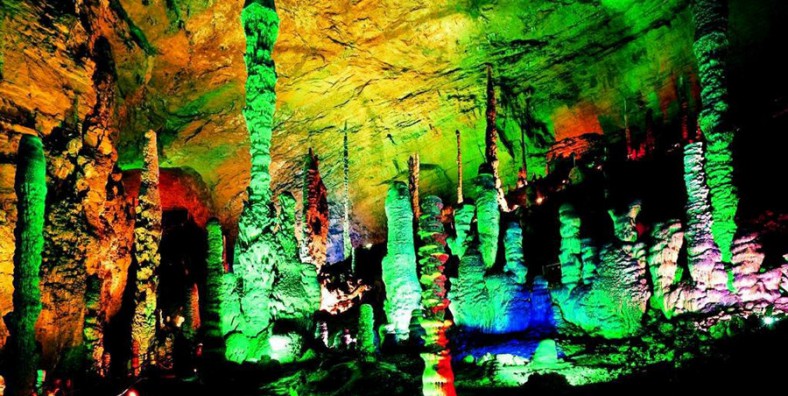 Jiutian Cave, the national scenic area, is a major attraction of Maoyan River Scenic Area. Jiutian Cave is praised as the first cave in Asia. The name of Jiutian Cave is obtained from its nine skylights connected with the ground. Located in Sangzhi County,70km away from Zhangjiajie Downtown.

Why is Jiutian Cave So Special?

Jiutian Cave, the national AAAA scenic area, is a major attraction of Maoyan River Scenic Area. Jiutian Cave is praised as the first cave in Asia. The name of Jiutian Cave is obtained from its nine skylights connected with the ground.

Jiutian Cave is located in Lifuta Township of Sangzhi County, 72 km west of Zhangjiajie City. It is currently the largest cave found in China, three times larger than Lichuan Cave, which is said to be the largest cave in the world. Jiutian Cave is divided into upper, middle and lower layers with a total area of 2.5 million square meters, in which there are layers of stalagmites, stelae and stalactites in beautiful shapes and peculiar structures everywhere.

Jiutian Cave is a rare underground gem. In 1987, it was identified as “the first cave in Asia” after three on-site investigations conducted by more than twenty experts in caves from seventeen countries. In 1995, it was approved as a member of the Exploration Base of International Limestone Cave Association.

What to See in Jiutian Cave

Jiutian Cave is the largest hole in Asia – Jiutian, because here are nine skylights connected with the cave, thus it got this name. the cave is divided into three layers, with a total area of 2.5 million square meters. The lowest layer is 420 m under the ground. Inside the cave, there are 40 halls, 3 underground rivers, 12 waterfalls, 5 bridges, and 3 natural lakes. There are numerous stalagmites, stalactite, stone curtains, etc. Jiutian Cave is recognized as a wonder among caves in China.

The first skylight is not only the largest one in Jiutian cave, but also the one that is nearest to the ground (so we generally choose to this skylight to go in or come out of the cave). It is 54 meters above the ground according to experts, the hole into the ground we are standing gap between the upper and lower 18 meters. When you enter hole, inside the first place is a hall with an area of approximately 250 square meters.

How to Get to Jiutian Cave

If you want to get rid of hustle of transportation and troublesome navigation, you can book a private tour package which covers visiting, dining and transfer from us. Our local tour guide and driver will escort you Jiutian Cave in Zhangjiajie with speed and convenience, and take care of all the details. You just need to focus on travel.