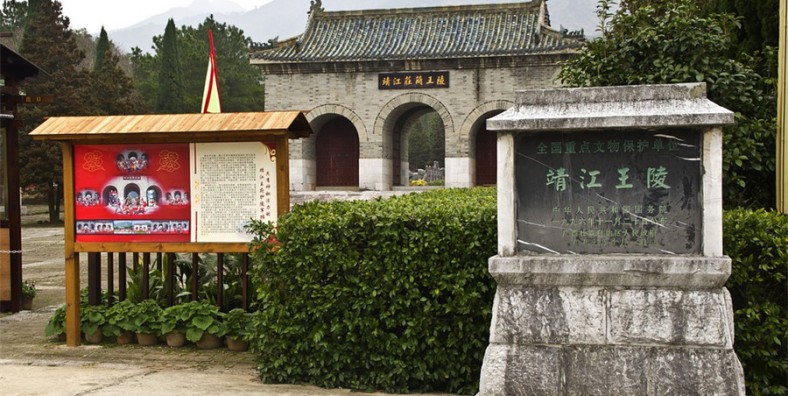 The 300 well-preserved tombs making up the biggest ancient tomb group in south China.

Why is Jingjiang King Tomb So Special?

Now the well-preserved tombs have become important relics of culture and history in Guilin City. The mausoleum in large size has about 210,000 square kilometers, while small ones cover an area of 4,600 square kilometers. Except the tomb of Diaoxi Seignior sits in the east and faces the west, others all sits along the mountain and faces all directions.

Where is Jingjiang King Tomb

Located at the southern foot of Yao Shanxi, eastern suburb of Qixing District, Guilin City, Guangxi Zhuang Autonomous Region Jingjiang King Tomb, covering over 100 square meters, are the most famous attractions in the Guilin Yao Mountain scenic area. It is a mausoleum for a royal family – the Jingjiang Family in Ming Dynasty whose eleven generations were buried.

In the Ming Dynasty, the title of king was named after the place of division. Since Hongwu was named king for three years when Zhu Yuanzhang, the first emperor of the Ming Dynasty, named his grandnephew Zhu Shouqian, his vassal state still called him jing jiang (Jingjiang has the same pronunciation). In order to appease the southwest, he changed his pronunciation to Jing (Chinese has the same pronunciation as Beijing), so the king here is called “Jingjiang King”. In the fifth year of Hongwu in the Ming Dynasty, the Ming government changed the Jingjiang government to Guilin government. Since then, the name Guilin has been officially confirmed and is still in use. However, Queen Jingjiang did not change her name, so later generations knew that there was a King Jingjiang in Guilin.

King Jingjiang was one of the ten vassal states spread by Zhu Yuanzhang and Hongwu in three years, and was also the only grandnephew spread as seigniorage. Hong Wu was granted seigniorage in three years and died in November of the 7th year of Shunzhi (1650).

In the first year of Yongle, Zhu Zanyi, Zhu Shoujia’s eldest son, ascended to the throne of Guilin. Since the hereditary succession of King Jingjiang, he inherited the throne of 14 people, which lasted 280 years until the Qing army conquered Guilin (1652).

The architectural layout of the Jingjiang tomb is rectangular, with the tomb gate, the middle gate, the burial palace and the underground palace on the central axis. Each mausoleum has two walls, usually divided into two parts, the outer and inner courtyard. There are wing rooms, mausoleum doors, sacrificial passages, jade belt bridges, stone carvings and animal carvings around. The inner courtyard has a central gate, a spiritual palace, stone carvings and underground palaces. The open Jingjiang Zhuang Jian Wang mausoleum room displays some relics unearthed from Jingjiang Wang mausoleum, including beautifully shaped blue and white plum flower vases, which are rare and extremely precious in the world.

The most complete tomb in Jingjiang should be the surface stone carving ceremonial weapon of the 11th tomb, with 334 statues in total. Among all the royal tombs in the country, not only are they few in number, but they basically started in the Ming Dynasty and ended in the Ming Dynasty. They both inherited and developed with the times, creating a huge group of stone carvings. There are six railing sculptures, sacrificial path tombstones, tame animals, wild animals, mythical creatures and Weng Zhong. From different times and different angles, they reflect different styles, which not only reflects the dignity of the royal family, but also reflects the artistic pursuit and achievements of ancient artists. At the same time, they also provide us with a relatively complete set of data for the study of seigniorage in Ming Tombs.

The Jingjiang Mausoleum Museum was opened after the restoration (1987) of Zhuang Jianwang Mausoleum (the third generation of Jingjiang Mausoleum). It is part of the Jingjiang Mausoleum where unearthed cultural relics are displayed. Archaeologists discovered two king’s tombs and some imperial clan tombs in the 1970s. They found magnificent treasures buried with the king in Jingjiang cemetery prison, such as ceramics, gold and silver vessels and jade articles, most of which were ceramic vessels, especially blue and white plum flower vases, with more than 300 pieces and more than 10 varieties. These funerary objects revealed the life and burial system of Jingjiang Huali Wang in Ming Dynasty from one side. What is more precious is that about 50 square meters of epitaphs have been unearthed in the Jingjiang tomb area, because their contents are true and correct and of great historical value. Exquisite calligraphy with high artistic value is a valuable raw material for studying Guilin local chronicles, Ming Dynasty coinage and calligraphy art.

There are 13 kings in Jingjiang, 11 of whom are buried in Guilin. The tomb that can be visited is the tomb of the third king, King Zhu Zuojing of Zhuang Jian and his princess. The cemetery covers an area of 87 mu and is divided into internal and external parts. Enter the tomb gate, there are three brick offerings channel. From the way of sacrifice to the deep heart’s core, people can visit the magnificent coffin palace, which is the main place for sacrifice. Behind the palace is the royal cemetery. On the left and right sides of the tomb are two banded hills scattered with conifers, red walls, historical relics and natural scenery.

If you take bus in downtown, you can take bus No.10 then transfer to bus No.24 (or take bus No.24 directly) and get off at the previous stop of GUAT (Guilin University of Aerospace Technology), and then walk to Jingjiang King Tombs Scenic Area. It is recommended to spend 30 minutes to 2 hours to visit inside.