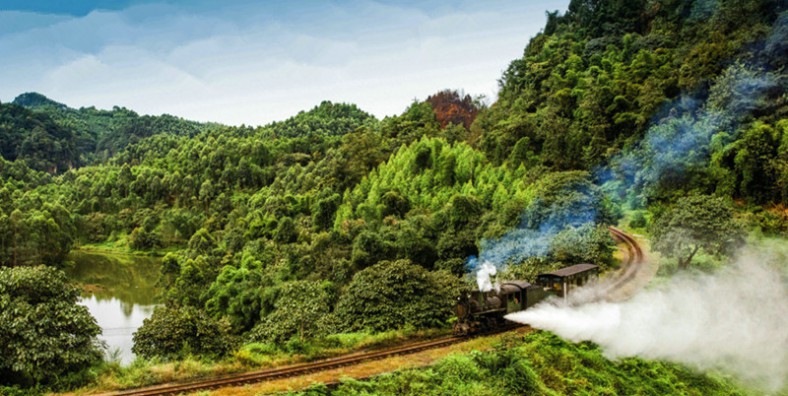 Why is Jiayang Steam Train So Special?

The train is reputed as the “living fossil of the Industrial Revolution of the 18th century”, but sadly, rarely known to travelers who plan to visit Leshan. It boasts as the world’s only steam train for normal passengers-transfer on narrow gauge still operates all year around today. If you look for more than beautiful landscapes in Sichuan, an old-fashioned steam train ride in Leshan can be quite an enjoyment.

Where is Jiayang Steam Train?

If you want to get rid of hustle of transportation and troublesome navigation, you can book a private tour package which covers visiting, dining and transfer from us. Our local tour guide and driver will escort you to Jiayang Steam Train with speed and convenience, and take care of all the details. You just need to focus on travel.

From Chengdu: Passengers can take the bus from Chengdu Chadianzi Long-distance Bus Station to Jiayang Directly (only one bus daily departing at 09:00am). The journey time is 3.5 hours. The bus fare is 70 CNY. If the bus ticket is not available, go to the Shiyangchang Bus Terminal, where there are regular buses running from Chengdu to Qianwei (journey time of 2.5 hours, bus fare at 65 CNY), then transfer to another bus to Jiayang (Sanjing, the departure station of the Jiayang Steam Train).

From Leshan: Passengers can take the bus from Leshan Lianyun Bus Station to Jiyang Directly (only one bus daily departing at 14:30, bus fare at 18.5 CNY). Or On the same bus station, you can take a regular bus from Leshan to Qianwei first (journey time of 1 hour). After arrival, take another bus to Jiayang (45 minutes’ drive).

Mifengyan Station: Passengers can see how the herringbone railway work (created by Zhan Tianyou, the ‘father of China’s railroad’) and visit an open-air Steam Locomotive Museum.

HuangcunJing Station: The final station of Jiayang Steam Train, Huangcunjing was the extended mine of Jiayang No.1 Mining.

There are two types of Jiayang Steam Train, the sightseeing train and the common passenger type. For international visitors, you’re suggested to take the sightseeing type, with much better condition on its both common carriages and air-conditioned luxury carriages. There are two sighting trains daily departing at 10:30 and 14:00 separately. The train runs about 2.5 hours and stops at attractions for about five to ten minutes for sightseeing.

Today the steam locomotive has been completely replaced by the convenient, fast diesel locomotive and electric locomotive. World’s steam trains are almost extinct. However, Jiayang Narrow Gauge Steam Train is still operated. It takes about 2 hours for the train to do a round trip on the 19,284-meters-long and 762-millimeter-wide railway. Each carriage of Jiayang Steam Train can carry only 20 to 30 passengers. There are six tunnels and 109 turns and bends on the railway. Some of the blends are so big that you can even hardly see in the world. So if you are a steam enthusiast, why not plan yourself a tour to Leshan, Sichuan Province to try Jiayang Steam Train.