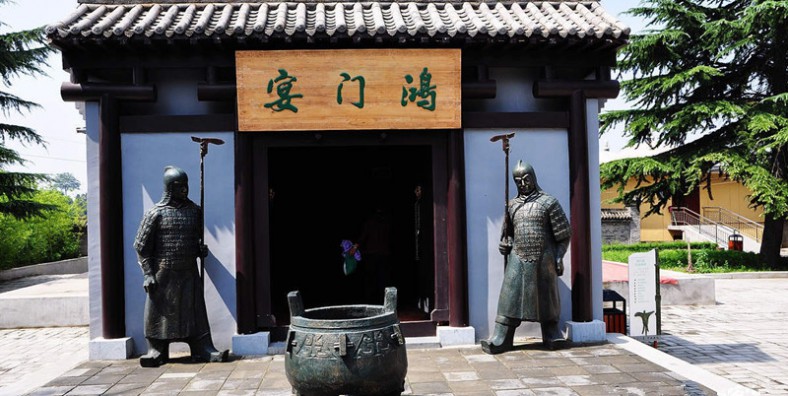 The Hongmen Banquet Site is located in the main road of Shaoguan to Chang'an. The story of the famous "Hongmen Banquet" between Liu Bang and Xiang Yu is here. However, the existing sites are reconstructed by modern people. They are made of blue bricks. The tall flagpoles are flying with apricot-colored handsome flags.There were statues such as “Zhengzhuang Dance Sword”, which vividly reproduce the important scene in the war.

Why is Hongmen Banquet Site Museum So Special?

According to “Historical Records” written by Sima Qian during the Han Dynasty (202BC-220AD), the Hongmen Banquet Site Museum, also called the Site of the Feast at Hongmen Gate, is where the famous historical event, Feast at Hong Gate took place. It is located in Lintong District, 2.5km (about 1.5mi) from the Terracotta Army and 40km (25mi) from the Xi’an city center. The main attractions in the museum include Forest of Stone Steles, statues of the dominant political figures from Chu and Han States, ancient Feast Site, War Drum Platform, Han Toilet, and Tent of the Feast.

The site is on the arterial route from Tongguan, an important pass to Chang’an (today’s Xi’an). A steep plateau is split into two in front of the site. The gap seems like a city gate, hence the name Hongmen, meaning wide gate in Chinese.

The famous Feast at Hong Gate happened in December of 206BC after Xiang Yu, King of Chu (206BC-202BC), had destroyed the main force of Qin Dynasty (221BC-207BC) while Liu Bang, King of Han, with much less army power, was first to reach Xianyang, the capital city of the Qin Dynasty. Xiang Yu’s advisor, Fan Zeng, suggested he ask a swordsman to play a sword-dance at the celebratory banquet and take this opportunity to kill Liu Bang. However, Xiang Yu became indecisive and, as a result, let Liu Bang escape. Following this, Liu Bang started the Chu-Han War, defeated Xiang Yu, and finally founded the Han Dynasty. This event therefore is considered an important turning point in Chinese history.

There are two exhibition halls in the Hongmen Banquet Site Museum, Heroes of Chu and Han, and War between Chu and Han. Using texts, pictures, sand table, statues and some cultural relics, these halls show history from that time. The former exhibition hall shows the history from 209BC to 206BC, before the Banquet at Hongmen, about how Liu Bang and Xiang Yu started their insurrection. The latter hall shows the 4-year war between Han and Chu.

There is a screen wall behind the entrance gate of the museum. On the front of the wall, the story, “Historical Records of the Feast of Hong Gate” is inscribed; on the back of the wall are eight Chinese characters meaning ‘a feast at Hong Gate is the key turning point for the following thousand years’. Behind the screen wall, a row of statues of the major figures from the Chu and Han State sat this banquet is in front of the ancient Banquet Site. The statues from the Chu State are those of Xiang Yu, Fan Zeng, Xiang Bo, Xiang Zhuang and Chen Ping, and the statues from Han are Liu Bang, Zhang Liang, Fan Kuai, Xiahou Ying, and Cao Wushang.

The ancient Banquet Site at Hong Gate is constructed of black bricks, with the length, width and height of 14m (15yd), 14m and 3.5m (4yd). According to historians, Xiang Yu, king of Chu, gave a banquet for Liu Bang here. In the center of this site is a flagpole about 10m (11yd) high on which are the flags of Chu and Han. In front left of the ancient Banquet Site is the Forest of Stone Steles. It shows 12 steles inscribed with poems about the feast written by poets from different dynasties.

Behind the ancient Banquet Site is a War Drum Platform, where two drums called Bawang Drum, representing Xiang Yu, and Gaozu Drum, representing Liu Bang, symbolize the war between Chu and Han. Visitors can beat the drum and take photos. 20m (22yd) behind the ancient Banquet Site is an ancient Han Toilet. It’s said that during the banquet, Liu Bang escaped from here and took a path back to his barracks. On the right of the ancient Site is a tent, inside which the layout of the feast has been restored.

How to get to Xian Museum

If you want to get out of the traffic and hassle of navigation, you can book a private tour package that includes visiting, dining and transfer from us. Our local guide and driver will escort you to the Xian Museum in the fastest and most convenient way and take care of all the details. You just have to focus on the visiting.

Take Tourist Bus Line 5 (No. 306) at Xi’an Train Station and get off at Dongsancha Station. Then take Lintong Bus No. 301 and get off at Hongmenyan Station.