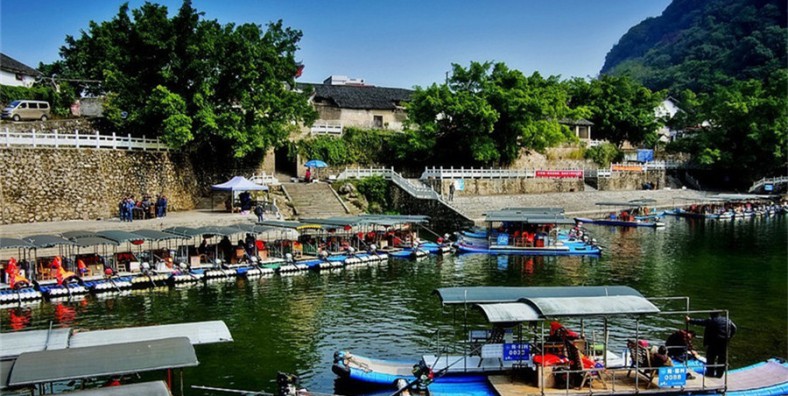 Fengfei Mountain, Parrot Mountain and Ma Mountain are surrounded by mountains on three sides. This beautiful scenery is the perfect background for Liu Sanjie's films here. The cultural buildings, products and customs here are also very attractive and interesting.

Why is Fuli Ancient Town So Special?

Fuli Ancient Town is known also as Chinese Painted Fan Town as exquisitely painted fans are created here. When you walk along the town’s Ancient Street, you will find a great variety of painted fans for sale. They are handcrafted from mao bamboo from beside Li River and local tissue paper. Open a fan, and you will see a beautiful and colorful painted Guilin landscape or a poem extolling the wonders of Yangshuo.

Where is Fuli Ancient Town

Fuli ancient town is 8 kilometers (4.9 miles) away from Yangshuo, Guilin, and has a history of more than 1,000 years. This town with beautiful natural scenery is located at the edge of Lijiang River.

The exhibition hall includes the Grand Hall, Kuixing Hall and Jielongqiao Hall. The octagonal pillar daguang pavilion stands on the floating dock. The stone tablets in the pavilion are engraved with poems praising the beautiful night scenery and the ancient town of Fuli. In the north of the exhibition hall, you can see Kuixing Hall, a high arch building made of large stone bricks. Jielong bridge pavilion is built on a bridge with a 3-meter (9-foot) high stone shaped like a dragon head.

There are three stones 30 meters (32 yards) from Daguang Pavilion, called Sangu Stone. No one knows when these stones were brought to Fuli ancient town or where they came from. Knock on the stone and you will hear a strong voice like a big clock. There are dozens of banyan trees near the stone.

Fuli ancient town has different cultures, because almost half of the local people are immigrants from Guangdong, Fujian, Jiangxi and Hunan. Many people observe the ancient Nuo culture originated from primitive tribes. The music and dance of Nuo culture are used to exorcise evil spirits. Another important culture in the town is Mazu culture. Mazu is a sea goddess revered by the people of Guangdong and Fujian provinces. The Temple of Heaven in the town is dedicated to Mazu. The windows, halls and beams of the palace were decorated with carved dragons and phoenix. After entering the palace, you will see two sacred statues of bodhisattva. One is Mazu, also known as Popo, and the other is Gong Gong, which symbolizes kindness and loyalty.

Cultural Fair on Lunar May 8

Every year on the 8th of the fifth lunar month, Fuli ancient town holds a festival to celebrate the birth of the two gods worshipped by the queen of heaven temple. The statue was placed in a red car and transported from the temple to the town’s cultural square. In the square, the parade of colorful flags and sedan chairs was followed by different performing groups, such as yangko, rowing and dragon and lion dance teams. The drum music played throughout the performance was very exciting and interesting. These artistic performances from different parts of China gather here to celebrate and promote people’s pursuit of happiness.