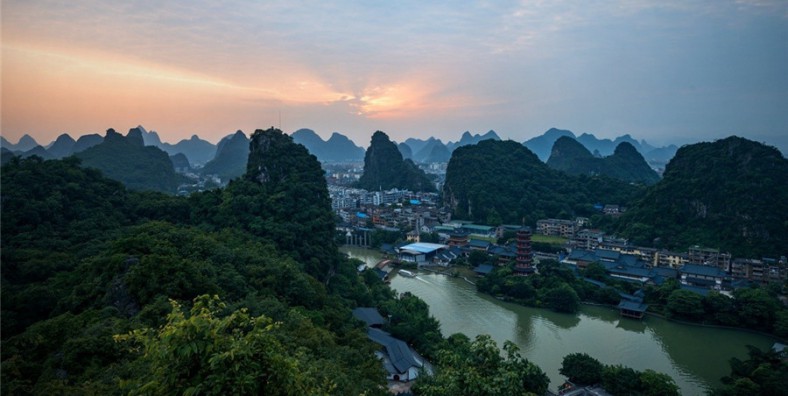 A visual feast of magnificent scenes such as Diecai Pavilion, Wind Cave and Cloud-Catching Pavilion, along with countless stones with inscriptions created by famous Chinese scribes, awaits your eyes.

Why is Folded Brocade Hill So Special?

This is a hill with many names and stories. It is called folded Jinshan because many rocks are stacked one upon another. Legend has it that there were many osmanthus trees on this mountain, so it is sometimes called osmanthus mountain. Folded Jinshan covers an area of about 2 square kilometers in the urban area. People can easily climb the mountain. Many Chinese characters decorate the rocks on the path leading to the top of the mountain.

The folding pavilion on Mount Jinshan is called the folding pavilion. It provides a fascinating bird’s eye view of the surrounding scenery. To its west, there are a series of unique Dong style garden buildings. From the top, you can enjoy the colorful scenery of Guilin and the panorama of lush green plants, just like a complicated brocade fabric. The magnificent scenery at the top of the mountain will leave a deep impression, especially at sunset.

Where is Folded Brocade Hill

Towering over Li River’s west bank, Folded Brocade Hill (Die Cai Shan) lies in the northeastern part of Guilin city. The name is derived from its queer-looking rocks, which are broken horizontally.

There are many inscriptions on the steles of famous people in past dynasties. Especially they are the essence of cultural relics. If you climb to the top of Mingyue Peak and stop at Nayun Pavilion, the scenery of the whole city is like a picture in front of your eyes. Shejin Mountain was named after Yuan Zhen’s nephew who visited Shejin Mountain in the Tang Dynasty. He wrote a note on Shejin Mountain, which said: “According to maps and records, the mountain is like a piece of cloth, covered with stone stripes, and the mountains alternate with green, just like Shejin Mountain, so it is named Shejin Mountain.” Folded brocade rocks are like colorful silks and satins, with their names stacked one on top of the other.

The folding brocade garden gate was built in 1990 and is an antique round gate with cornice, hard ridge, sloping top and green ceramic tiles. Wang Xiaju, a famous calligrapher in modern China, wrote “Folded Jinshan” on a horizontal plate and hung it on it. Tickets are located on the left and right sides of the wall and decorated with antique and elegant glass windows.

The Yangdian Temple of Folded Jinshan is an antique building located on the throat leading to Shangfeng Cave. People can go upstairs from here. On the gate was a banner written by Wei Qichang in his own handwriting, which read “Fold Jinshan”. In the Qing Dynasty, couplets hung on the columns of Zhang Xianghe and Guilin calligrapher Wu Chundao. After the entrance, that is to say, people will enter the place mixed with historical relics, religious resorts and natural scenery.

On the right side of the platform of the folding Jinshan wind tunnel and nandong, there is a pavilion built during the Huichang period (841-846) of the Tang dynasty. it has been repaired in past dynasties, but later turned into a waste pavilion. dozens of precious poetry anthologies were destroyed in the anti-Japanese war. Jingfeng Pavilion used to be a famous building. Celebrities of all ages wrote poems here. Constitutional reform and modernization celebrities Kang Youwei and centennial patriotic Ma Xianbo successively lived here.

The folding brocade pavilion is located on the mountain climbing road of folding brocade mountain. It is a square pavilion with a flat roof, a single layer, red pillars and a green title. It is about 5 meters high, 7.5 meters long and 8.5 meters wide. The area is 64 square meters. On the front is a horizontal plaque of “Folded Jinshan” written by famous calligrapher Wang Xiaju. Folded Jinting is on the east side of Yueshan Mountain, on the west side of Wangsi Mountain and on the north side of Mingyue Peak. It is integrated with the mountain scenery. Folding Jinting is an ideal place for entertainment.

Folded brocade palace is located between mingyue peak and yuyue mountain. it is a large landscape architecture group. it was built on the basis of dong people’s architecture in northern Guangxi with a construction area of 1300 square meters and was built in 1990. The central axis of the folded brocade palace is the drum tower and corridor. The whole building can be divided into east and west courtyards. The center of the compound is a pool, the east is a shelf, the west is a pavilion corridor, the south is a building, and the north is a waterside pavilion.