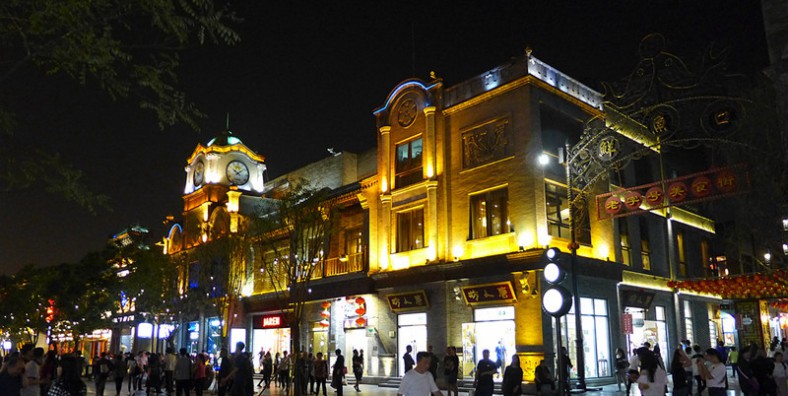 It is a famous commercial street outside Qianmen in Beijing. Now it also refers to dashilan street and a piece of land including the front page of corridor houses, grain shop street and coal city street.

Why is Dashilar Street so Special?

History favored it, but wounded it at the same time. The lane was burned down and repaired several times. In 1900, the fences suffered two fires. In the 1960s, it was upgraded for the first time, with the first asphalt road in the city. It became more convenient to development businesses there. In the 1990s, in order to win the title ‘First Pedestrian Street of Beijing’, the fences were repaired once again. In 2000, iron fences were added by the local municipal government. Little by little it became a bustling attraction.

Located outside the Qianmen, it takes dozens of steps to walk from southwest of Tiananmen Square to its east end. The prosperous classes of the ancient Beijing nurtured its business. Now, Dashilar Street is famous for all kinds of stores with an antique flavor. Many people come here to experience the relics of historic wealth. Every day there are 150,000-160,000 visitors. On weekends and public holidays, this increases to more than 200,000.

Ma Ju Yuan: Ma Ju Yuan is actually the name of the shopkeeper. This hat shop has a history of more than 185 years. In the Qing Dynasty, this shop made hats for government officials with excellent materials and exquisite workmanship. People like to wear Ma Ju dollar hats to show off their wealth. Ma Ju Yuan provides hats to meet the needs of people from all walks of life. You can also see the hats of different ethnic groups in China here. Even some western leaders have made hats in this shop.

Inline Sheng: The shoe store was listed on the national intangible cultural heritage list in 2008. Nei refers to working in the royal court. Succession means promotion. Headquartered at 34 dashila street. At first, this store only produced court boots. The shoes here are still very popular today, not only because they are handmade, but also because they are comfortable and healthy to wear. Children, adults, men and women have shoes. Some tourists buy them as souvenirs.

There are many other ancient and famous shops still open, many of which have been updated. Ruifuxiang is a silk shop. There are a total of eight old silk shops called “Xiang”, but now there is only Rui fu Xiang left. Liu biju is a pickle shop, which was founded in the Ming dynasty. It provides all kinds of delicious kimchi. In its name, “Liu bi” refers to six basic necessities of life: fuel, rice, oil, salt, soy sauce and vinegar. In addition to these shops, tourists can also drink tea in Zhang Yiyuan, buy traditional herbs in Tongrentang and taste local snacks in Yun Ge of Qing Dynasty.

Dashilan Hutong was not only the commercial center of old the old city, but also the center of entertainment. During the most prosperous time, there were five Opera theaters. In addition, the first cinema of the city, Da Guan Lou Cinema, is not far from the west entrance. The first film in China was shown in this cinema. It is an important witness to the development of China’s movie industry.