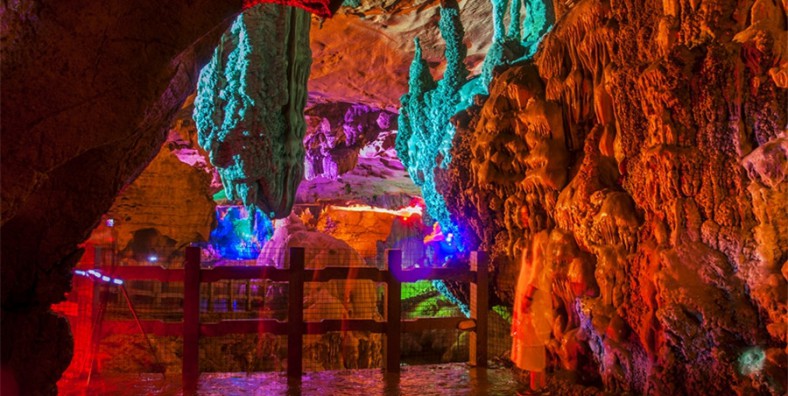 It boasts the world's longest sightseeing sliding track, setting a new record according to Shanghai China Records. As far back as 1637, Xu Xiake, a renowned Chinese traveler, had visited the cave and described it in detail in his travel notes.

Why is Crown Cave So Special?

From a distance, there is a hill shaped like a crown on the east bank of Lijiang River. Therefore, the cave below it is called Crown Cave, or Yan Guan in China. It is now the largest comprehensive scenic spot in Lijiang River. It was once called Ganyan Cave because of its sweet and clear spring water. It claims to be the longest sightseeing slide in the world, setting a new record according to Shanghai’s China record. As early as 1637, the famous Chinese traveler Xu Xiake visited the cave and described it in detail in his travel notes.

Where is Crown Cave

Crown Cave, also known as Guanyan Cave, is located in Caoping Town about 37 km (23 miles) south of Guilin and about 56 km (35 miles) north of Yangshuo.

Crown Cave is famous for all kinds of transportation that can be used for sightseeing. It takes about 40 minutes to walk from the entrance of the cave. Or you can take a sightseeing train to the hillside about 3.2 kilometers (2 miles) away. It is very interesting to drive alone through the idyllic sea.

On the hillside, an elevator descended into the cave. In the intricate labyrinth of caves, there are five caves spanning three layers. The stalactites, stalagmites and stone pillars inside will dazzle you with ever-changing colors and make you want to stay for a long time. Then you can take the tram to the palm hall on the second floor, where there is a large collection of stalactites. Of the four palm-shaped pillars, the tallest one is more than 50 meters (164 feet) and extends to the top of the cave. The “palm tree” is too thick and needs several people to hug it. Seeing this, tourists cannot help marveling at the magic power of nature. The third floor is an underground river, 1000 meters long (1090 yards) and 500 meters wide (546 yards). You can take a boat to experience the unique scenery of the river. After you landed, many other karst landscapes are waiting for you. Surprisingly, there are even waterfalls in the cave. Take the stone steps and you will reach the exit, where you can see the beautiful scenery of Lijiang River.

Apart from the underground landscape in the cave, the scenic spots on the ground, such as Taoli Garden, Mount Olympus Garden and the cyprinid pond in the scenic spot, are all worth visiting. About 500 meters (164 yards) downstream of the Crown Cave Scenic Area lies the mysterious and beautiful Xiangba Island, formerly called Langzhou Island, which covers 33 hectares (82 acres). On the island, the first thing you see is all kinds of wooden masks. Cinnamomum camphora, grapefruit and peach trees grow in abundance on the island. In addition, you can also enjoy local folk dances, exquisite works of art and delicious local dishes and experience rich ethnic customs. Xiangba Island, opposite the river, is another interesting place on the Lijiang River, the lobelia, where a huge rock blocks the road between two villages on the same river bank. If time permits, you can visit on foot.

Note: Lijiang River cruise ship passed through the cave, but did not stop. Therefore, to visit the crown cave, you need to take a bus from Guilin. Tourists often take a one-day tour here with the nearby Gudong Waterfall.