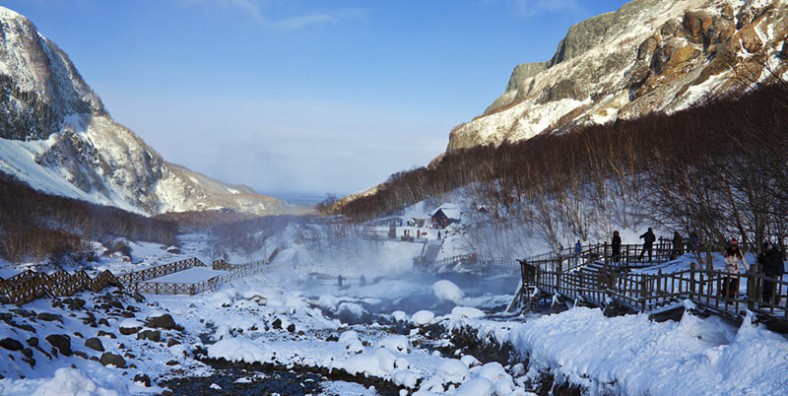 Why is the Changbai Mountain So Special?

Nvzhen ethnic people in the Jin Dynasty(renamed as Manchu Ethnic Nationality by Huangtaiji(皇太极)) always regarded Changbai Mountain as their birthplace. They often worshipped the Changbai Mountain in order to bless the prosperity of their country and the everlasting emperor.

The Tianchi Lake is located at the top of the volcanic cone of the main peak of Changbai Mountain. It is a volcanic crater. After a long period of time, it has accumulated water to form a lake. The Tianchi Lake is oval in shape and the highest and largest alpine lake in China. It is the birthplace of three major rivers in Northeast China: Songhua River(松花江), Yalu River(鸭绿江) and Tumen River(图们江).

There is a gap between Tianwen Peak and Longmen Peak on the north side of Tianchi Lake. The water overflows from the gap and flows northward through the cliff and forms a group of waterfalls with a drop of 68 meters. It is the first attraction of Changbai Mountain and the largest waterfall group in Northeast China. It connects with Tianchi on the top and opens Erdaobai River on the bottom, which is the main source of Songhua River.

Julong Spring is the largest, most widely distributed and highest hot spring in the hot spring group, which can be called the first spring in Changbai Mountain.  It is located at about 900 meters north of Changbai Falls.  It covers an area of more than 1000 square meters, and Erdaobai River passes through the hot springs. On the right side of the river, the springs are concentrated. Countless heat flows from the ground, like a group of dragons spraying water, so the name of Julong Spring, in the lower part of Julong Spring built a Yishen Bath(怡神浴).

Mountaineering along the northern slope to Tianchi, at the junction of Yuehua Forest Belt and alpine tundra, a natural gap is formed, which is known as the Black Wind Gap of Changbai Mountain. You can enjoy the whole picture of Changbai Waterfall in the gap. You also can see the U-shaped valley from the top of the gap. Looking up from the bottom of the U-shaped Valley to the Black Wind Gap, the gap becomes the gate of the castle, which opens between the two castles and is known as the Nantianmen(南天门, the gate of heaven). On the gap, there are often swallows. The cliff cliff is just the nest of swallows.

How to Get Around in the Changbai Mountain

Changbai Mountain Scenic Area has a unified  eco-car by the official for tourist, which is departing every 15mins.  eco-car departing from the entrance of scenic spots usually drive directly to the nearest station from the top of the slope, then turn back and stop at each scenic spot in turn. Travelers will purchase the ticket at Visitor Center. Travelers can take cable car to from the the entrance of Changbai Mountain and the price is ¥85/person. It is unlimited number of rides on the same day. It should be noted that the top of the north slope is close to the top of the mountain, and Tianchi can be seen in a few minutes’walk. It takes more than 1400 steps to reach the top of the mountain for the car to descend from the West slope.

June to September is the best time to travel in Changbai Mountain. July to August is the peak season of tourism, and mid-November to March of next year is the skiing season.

The entrance ticket for the Changbai Mountai is ¥125/person. The ticket for eco-car in the scenic area is ¥85/person.

In October, the sunshine rate is high, and the probability of seeing the Tianchi Lake is relatively high. In the course of the day, it is most likely to see the Tianchi Lake between 10 a.m. and 11 a.m.