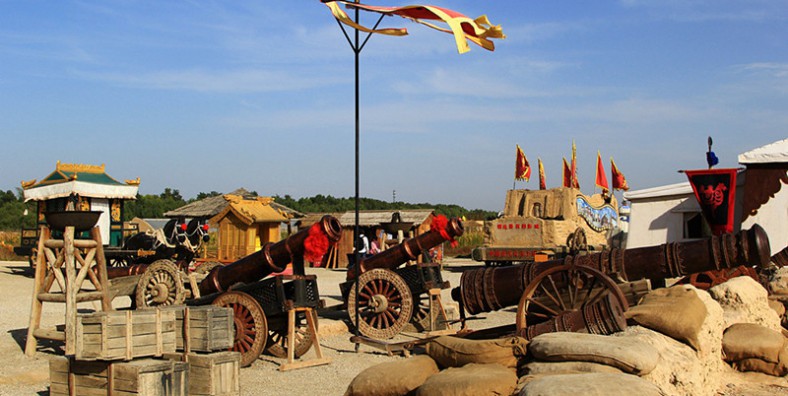 Zhenbeipu West Studio is one of the top 3 film cities in China, and also the unique famous one in Western China. Zhenbeipu enjoys a title as “the Hollywood in the East”.It is a base to cultivate movie stars.

Zhenbeipu West Studio(镇北堡西部影城) is located 35 kilometers (22 miles) west of Yinchuan city in Ningxia, it was formerly the site of Zhenbeibu frontier castle in Ming Dynasty (1368-1644 AD) and Qing Dynasty (1644-1911 AD) to defend against northern tribes. At present, Zhenbeipu West Studio gradually develops into a travel scenic spot including sightseeing, dinning, shopping and some other entertaiment activities.

Why is Zhenbeipu Western Film Studios So Special？

Zhenbeipu West Studio is one of the top 3 film cities in China, and also the unique famous one in Western China. Zhenbeipu enjoys a title as “the Hollywood in the East”.It is a base to cultivate movie stars. So many Chinese movie stars who have got film awards at home and abroad had their movies taken here.

Originally the strategically important location of two forts at the foot of Helan Mountain, these were destroyed by a massive earthquake. Reknowned Chinese writer Zhang Xianliang took over there, gradually, more and more settings have been preserved and the place has developed into today’s China Western Film Studio.

How to get to Zhenbeipu Western Film Studios

If you want to get out of the traffic and hassle of navigation, you can book a private tour package that includes visiting, dining and transfer from us. Our local guide and driver will escort you to the Zhenbeipu Western Film Studios and most convenient way and take care of all the details. You just have to focus on the visiting.

Take a special bus line from Nanmen Square to the studio directly.

Nearby Attractions in Yinchuan