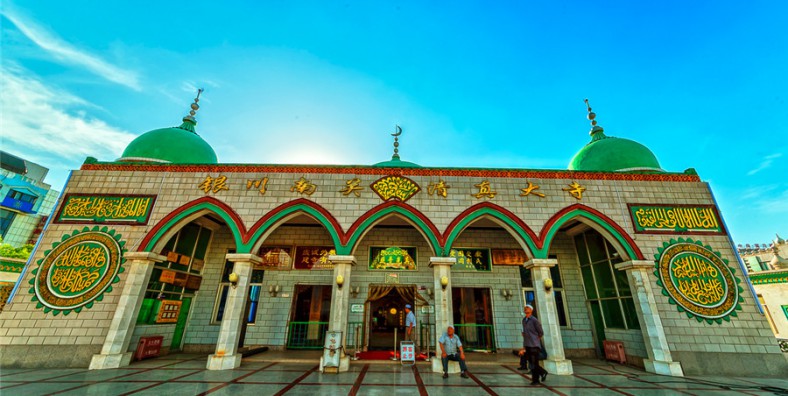 The Nanguan Mosque is famous for its unique, graceful structure and classical Islamic architectural style. It is also one of the most important religious sites open to the public.

The original Nanguan Mosque was built at the end of the Ming Dynasty (1368-1644). The Yinchuan Nanguan Mosque is an Arabic style Mosque located in the heart of a thriving metropolis, and is the home of the Islamic Cultural Center in Yinchuan, as well as the main location of prayer.covers an area of 2,074 m².

Its main building has two stories and a circular vault. On the second floor are a square Main Hall and balcony. The Main Hall can accommodate more than 1,300 people for worship at one time. On the first floor are a spatial shower room, a chapel, a hall of worship for women, an Arabic school, a bedroom for imam, an office, a reception room and other rooms.

The Nanguan Mosque is endowed with Islamic architectural style that is characterized by grand domes, long tines and arch doors and windows. There are five green domes on the top of this two-storey building. It is said that the biggest one in the center symbolizes the Mohammed, the prophet of Islamism, and that the other four symbolize four famous imams. The tabernacle in the hall is enchased with white marble and is engraved with the lection of Alcoran.  The buildings are a mixture of elegance, gaudiness and sobriety, presenting a scene of Islamic characteristics.

How to get to Nanguan Mosque

If you want to get out of the traffic and hassle of navigation, you can book a private tour package that includes visiting, dining and transfer from us. Our local guide and driver will escort you to the Nanguan Mosque and most convenient way and take care of all the details. You just have to focus on the visiting.

Nearby Attractions in Yinchuan