Why is Yunnan Ethnic Villages so special?

This theme park displays the colorful folklore and architecture of 25 ethnic groups residing in Yunnan Province. The theme park offers shows and performances, folklore and wax museums, as well as replica buildings found in the villages of each ethnic group.Villages of over 25 minorities including the Yi, Dai, Miao, Jingpo, Wa, Hani, Naxi, Dulong and others have been built here. Through various displays and re-creations of the original villages, the Yunnan Ethnic Village displays the diverse local ethnic culture. Villages of different styles are well arranged and show visitors their unique charm. Displaying a variety of buildings, lifestyles, and religious beliefs in the region, the village is a microcosm of Yunnan’s colorful and diverse ethnic culture.

At the main gate hangs a plaque inscribed with five Chinese characters, Yun Nan Min Zu Cun, saying Yunnan Nationalities Village. A logo of a flying golden phoenix is right below the plaque, symbolizing good wishes to the village. On the lawn near the gate is a group of white elephant statues, as it is a custom here to welcome distinguished guests with elephants.

The village is not only celebrating ethnic minorities, but it is also designed to give the world a snapshot view of both the natural scenery and cultural importance of Yunnan including: precipitous hills and beautiful lakes, parks, woods, old and modern treasures. Now the community has become a must-see for domestic and overseas visitors to Yunnan.

After entering, the first site coming into view is the Dai Village. Occupying 4.4 acres (1.8 hectares), the village is surrounded with water on three sides. Bamboo houses built on stilts are shaded with trees and flowers. A meandering path paved with red sandstones leads to a sacred Burmese-style temple. The lofty white tower, exquisite pavilions and bridges are very impressive. As a nationality loving singing and dancing, Dai People are proud of their peacock dance and music played on cucurbit flutes, which perfectly match each other.

The typical Bai Village is composed of some traditional Bai residential houses with rooms on three sides and a wall (with the door) on the southern side. Tourists should never miss the occasions of Bawang dances and March Street (a festival normally celebrated from March 10th to 21st of lunar calendar in Dali) 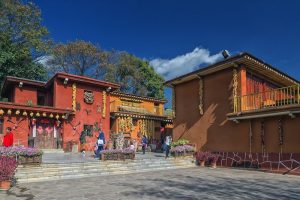 In the west of Harmony Square is the Yi Nationality village. It covers more than 8.4 acres (3.4 hectares). Since Yi People show respect to tigers, you can see a tiger rockery as well as a wall engraved with three tigers. A giant totem column is erected in the center of the magnificent Solar Calendar Square. Carved on the column are patterns of the sun, fire, tigers and the Eight Trigrams of ancient China. Around the column, there are ten black and white stone spheres facing different directions, symbolizing that life originates from the sun and the moon. The twelve lifelike carvings of Chinese zodiac animals on the peripheral add a lot of fun to the village. The distilleries, bullrings, and Mo Qiu, which is similar to a seesaw, represent authentic Yi culture.

Next to Naxi Village is Mosuo Village, which still maintains the matriarchy clans and the customs. What are special in Mosuo Village are the exquisite wood houses, delicious food, beautiful girls and last but not the least, the mysterious custom of walking marriage. Mosuo people’s marriage culture is quite uncommon. They prefer a visiting relationship between lovers—an arrangement they sometimes refer to in their language as sisi (zou hun in Chinese, meaning walking back and forth; or azhu zou hun, meaning friend marriage. Azhu means friend in Mosuo language). A Mosuo woman is free to receive male visitors after the coming-of-age ceremony at 12. A lover may stay overnight in her room but will return to his own mother’s home. Children born from such a relationship live with their mother. In Mosuo society, lovers can end their relationship at any time. For example, a woman may refuse her lover by simply no longer opening the door. Their marriage relationship is not a formal one.

With a courtyard building as the main body, and the village gate, workshop is corresponding, such as a grey tile brick wall and stone column is characteristic. Achang people are hospitable and respect the old and cherish the young. There are guest to nap, the host entertain the guest with good tea and serve better wine; When propose a toast or pour tea, avoid to accept without comity. There is custom that the host will try to persuade guest to drink and eat, whether people who can drink liquor or tea, it is taboo that guest does not accept; When guest is persuaded by the host during dinner-time, no matter you are full or hungry, you’d better receive what the host give with bowl holding in both hands. Receiving with both hands or get up to salute is regarded as a great respect.

Zhuang compatriots of Yunnan province mainly gathered in Wenshan prefecture, they live in Ganlan or Malan local-style dwelling houses, good at planting and diligent about farming, and they have customs of sun-worship, “Three Eternity Emperor” worship, ancestor-worship, and the custom of the master of elder is the leader. They regard highly of bronze drum, love silver ware, can sing and dance. They are hospitable and love to eat five-color glutinous rice, rice wine, and roasted tea. They have a national consciousness of self-esteem and self-confidence, their excellent traditional cultures are still intact that remain the ancient ethnic traditional culture essence of Baiyue minority.

Covers an area of 21 mu, the village has top residences and carving type flat local-style dwelling houses building. Sacred Tibetan Buddhist temple, magnificent welcome white pagoda, the “white yak” sculpture is symbol of auspicious peace and unique style of Tibetan architecture mutual set off, bring out the best in each other. During the festival, singing folk songs, dancing Guozhuang dance and Xianzi dance, riders are even competing for archery.

What to do in Yunnan Ethnic Village

Note: The time schedule is subject to changes due to weather conditions and other factors. 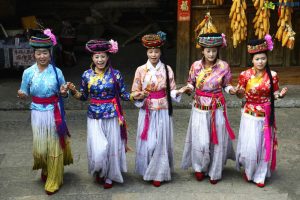 Yunnan Ethnic Village has managed to represent and exhibit the history, the cultures, the customs and the natural village houses of the 26 nationalities in this province. With the inclusion of precipitous hills, beautiful lakes and an integration of the customs, cultures, music, songs, dances, religious and architecture of the 26 nationalities, the village community has helped to show the world the true nature of Yunnan, a mysterious yet modern garden of ethnic cultures.

• From Changshui International Airport to Village of Ethnic Culture

Kunming Changshui Airport is about 25 km from downtown, it takes about 100 RMB to Kunming city. And it is inconvenient to take public bus from the airport to the village because of transfering, so we recommend people to go to Village of Ethnic Culture from the airport by taxi which costs at least 100 RMB.

Transportation Facilities within the Tourist Site

Golden Temple was built in Ming dynasty and was reconstructed by Wu Sangui in the 10th year of the Kangxi Period (1671 A .D.) made by brass which is the mixture of copper and zinc. That’s why it is named as “the golden temple”. It is totally weighted250 tons and 6.7 meters high; it isthe biggest and heaviest as well as the best preserved copper templein China. It is a key national cultural and historical relics. The whole temple reflects the excellent metallurgical and casting technology more than 300 years ago in Yunnan.

The Western Hills and Dragon Gate

Western Hills boasts an excellent environment with flourishing flowers and dense forest, providing tourists an excellent environment to enjoy the tranquility and marvelous scenery. They have also been given another name – ‘Sleeping Beauty Hills’ for the hills because its skyline looks like a beautiful young lady laying beside Dianchi Lake with her face upward and her hair trailling into water.

The Kingdom of the Little People

The Kingdom of the Little People is a theme park located near Kunming, Yunnan that features comic performances by people with dwarfism. Supporters of the park claim that it provides employment to people who would otherwise be unable to find work, but it has been criticized for treating dwarfism as a humorous condition.