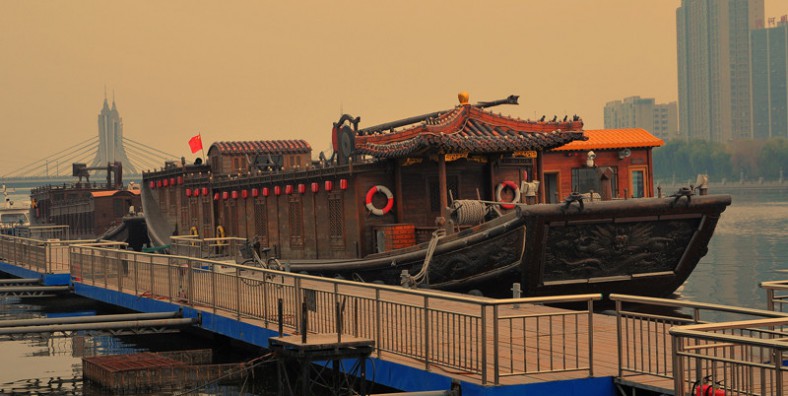 Tongzhou Canal Park is the closest tourist attraction to Beijing Grand Canal. You can not only enjoy the beautiful scenery and the magical canal, but also row and touch the canal to listen to the ancient legends of the canal. In addition, the Strawberry Music Festival and Ice and Snow Festival make the park more entertaining.

Why is Tongzhou Canal Park in Beijing so Special?

Tongzhou Canal Park is the closest tourist attraction to Beijing Grand Canal. You can not only enjoy the beautiful scenery and the magical canal, but also row and touch the canal to listen to the ancient legends of the canal. In addition, the Strawberry Music Festival and Ice and Snow Festival make the park more entertaining.
It is said that the Grand Canal made Tongzhou Canal Park famous. This canal is one of the longest, largest and oldest in the world.

Where is Tongzhou Canal Park in Beijing?

Tongzhou Canal No.1 Wharf is the north head of the Grand Canal. Wenyu River, Tonghui River, Yunchao River and Xiaozhong river flow into the Beijing Hangzhou Grand Canal, forming a spectacular scene of five rivers confluence at the source of Hebei Province. At the estuary of the Grand Canal, you can have a panoramic view of the newly built seven-hole stone arch bridge-type river gate, the grain inspection building rebuilt a hundred years after the loss of track and the ancient burning lamp tower standing for a thousand years.

The Cultural Square was completed in 2006, covering an area of 138,000 square meters. The central axis of the square is the Millennium footpath, which is carved with 226m long stone carvings, all made of 15cm thick granite and inlaid with bronze. Taking the historical age as the mainline, the Millennium trail selects the 14 most important events in the history of the Grand Canal, and visually displays the historical features of the canal. The Oriental theme sculpture in the square is designed by the famous artist Mr. Han Meilin, with a total height of 32 meters and a total weight of 260 tons. The whole sculpture consists of a giant dragon and three unicorns, of which the dragon is 10 meters high and the unicorn is 3.5 meters high. The sculpture is made of cast bronze and granite. The sculpture is located at the north head of the Beijing Hangzhou Grand Canal, expressing auspiciousness and ascension.

The Dipamkara Pagoda is also called the Dipamkara Buddha’s relic pagoda because there is a Dipamkara Buddha’s relic in it. The tower was built in the Liao Dynasty, and was repaired after the yuan, Ming, Qing and Tangshan earthquakes. The lighthouse is the tallest and largest tower in Beijing. The lighthouse is the first tower by the Dayun River. The legend about the tower has a long history and is rich and colorful. As a prominent sign of the north section of the Grand Canal, “Lingyun ancient tower” was named the first of the eight sceneries in Tongzhou in the Ming Dynasty.

Interesting Ice and Snow Festival is usually held in Tongzhou Canal Park Cultural Square from late December to early February. You can take part in various exciting activities, such as ice hockey, snow football match, snow sculpture, snow motorcycle and dog sled. You will have a good time here!