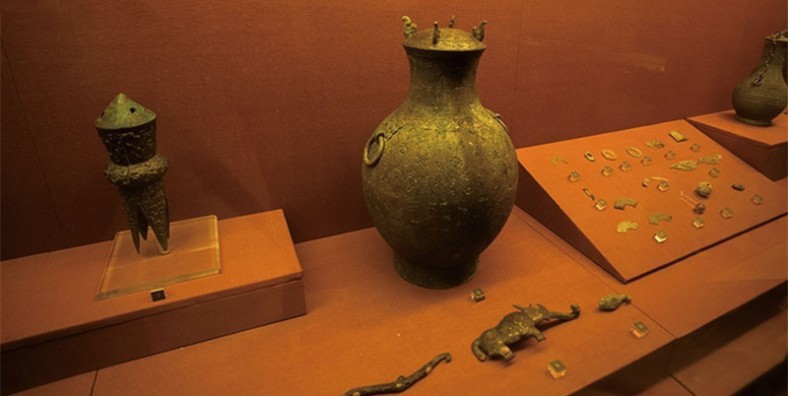 Founded in 1951, the Three Gorges Museum in Chongqing, which is one of the largest museums in south-west China, is not only a topical museum of the Yangtze Three Gorges but also a comprehensive museum of history and arts. It sits on the western side of the People's Square in Chongqing City, its unique architectural design makes it one of the most interesting and modern architectural feats of its time.
English Name: The Three Gorges Museum
Chinese Name: 三峡博物馆
Opening Hours: 09:00 am - 17:00 pm Close on Monday.

The Three Gorges Museum (simplified Chinese: 重庆中国三峡博物馆; traditional Chinese: 重慶中國三峽博物館) is a museum in the Yuzhong District of Chongqing, about the Three Gorges and Chongqing. It is one of the largest museums in the country.

The museum opened in 2005, replacing the former Chongqing Museum. It is located near the Chongqing People’s Hall. It aims to undertake education, preservation, and scientific research with respect to cultural heritage and the natural environment in Chongqing and the Three Gorges region of the Yangtze River.

Containing over 170,000 relics and artifacts from the surrounding region, the 23,000 metres floor-space of the museum is divided into four major exhibition halls with several themes, one of the halls dedicated to the ‘history and spirit of the splendid Three Gorges’, one dedicated to the ‘long history of the ancient Bashu area’, one dedicated to the history of the Japanese invasion of Chongqing and one to the history and development of Chongqing itself. The museum is also home to one of China’s most precious artifacts. All of the above make it a must-see in Chongqing.

There are four main displays