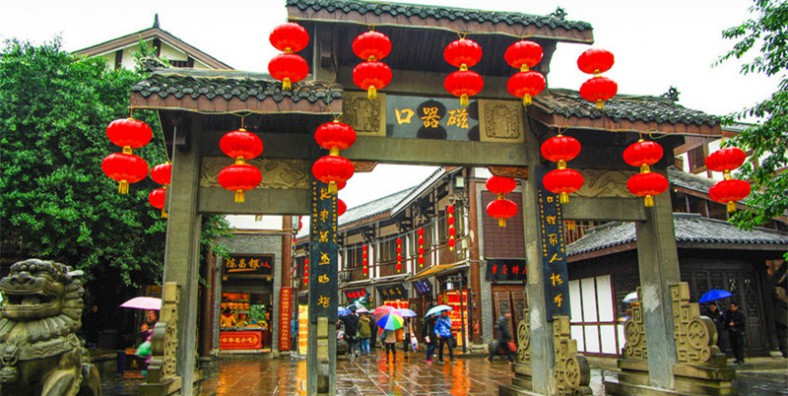 Ciqikou Ancient Town is located beside Chongqing city. It used to serve as a goods unloading dock. The town has more than a dozen streets and it is filled with ancient Ming Dynasty architectures. You can walk along ancient paths, taste local food and snacks, and chill in a teahouse to feel the ambience of old Chongqing. As the town is very close to the urban area, it is a popular attraction for urbanites' recreational activities.
English Name: Ciqikou Ancient Town in Chongqing
Chinese Name: 重庆磁器口古镇

According to an old Chinese proverb: “One flagstone road, and one thousand years’ Ciqikou”. The name of the town can be traced back to porcelain production during the Ming (1368–1644) and Qing Dynasties. Formerly a busy port located at the lower reaches of the Jialing River, a thousand years after its foundation the town remains a symbol and microcosm of old Chongqing.

Ciqikou is located on the west bank of the Jialing River and covers an area of 1.18 km2 (0.46 sq mi). Three mountains, Mount Jingbi, Mount Fenghuang and Mount Ma’an lie in Ciqikou, whilst Fenghuang Quan and Qinshui Quan run across it. The geography of Ciqikou is considered to have perfect Fengshuiby the local people.

According to historical records, Ciqikou was first built during the reign of Emperor Zhenzong of Song (r. 998–1004). It gained prominence during the Ming Dynasty as a commercial port and market town, shipping goods both by land and water. Reaching its climax during the end of the Qing Dynasty, the town has been described poetically, in Ciqikou, as “one thousand people greet each other during day … ten thousand lamps flicker at night”.

Travelers to Chongqing and locals alike throng to Ciqikou’s steep and narrow pedestrian streets. Shops sell porcelain, other handicrafts, and gifts, while restaurants and tea shops give visitors a look at what many areas of Chongqing were like before the metropolis became the vast urban agglomeration it is today. A 1,500-year-old Buddhist temple straddles the mountain in the middle of the old town.

The ancient town abounds in customs, many of which have lasted till now. These include baibazi, xingbang, family’s ancestral temple, Pao Brother, temple fair, dragon dance, dragon boat race, friends of Sichuan opera, chuntai drama as well as pingshu and teahouse culture.

Chongqing is known for its wide variety of local food traditions, especially the ubiquitous, spicy “hotpot”. Ciqikou is the real place for tasting local three famous dishes which include Maoxiewang (spicy duck blood), Qianzhangpi (bean curd sheets), and Yanju Peanuts (salted peanuts). All these are very highly recommended, you will not be disappointed and will soon come to realize why they are so popular.

The best time to visit Ciqikou ancient town is Spring and Autumn.Cixikou ancient town has a subtropical humid monsoon climate with an annual average temperature of 18 ℃. January is the coldest time, July to August is the hottest time. So spring and autumn are the most comfortable seasons. The most beautiful time of the day is morning and dusk. Chongqing is also called “furnace” because it is very hot in summer.