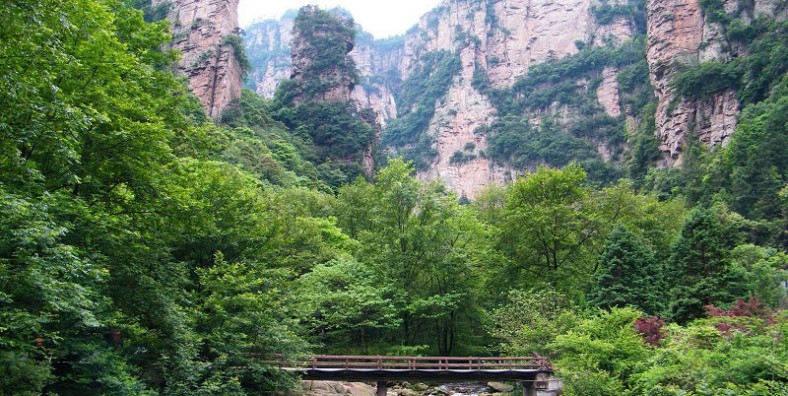 Why is Suoxi Valley Nature Reserve So Special?

One of must visit site inside Zhangjiajie National Forest Park with spectacular scenery of grand canyon, caves, forest, mountain and rivers.

Suoxi Valley covers an area of more than 180 square kilometers and is the largest of the three zones. Unlike the solitary stone monoliths of Zhangjiajie, the mountains of Suoxiyu stretch out one after another, like an unfolding scroll of a Chinese painting. However, in the east, there is a collection of caves, for example, Yellow Dragon Cave and Goddess Cave. These are caves made of limestone.

Ten-Mile Gallery is a strip gorge located in the northwest part of Suoxi Valley. On both sides of the gorge, many peaks rise in various shapes, looking like “statues” carved by nature. The best-known peak is “Old Gatherer of Herbs”. It is about 300 feet (91 meters) tall and looks like an old man with a basket on his back gathering herbs. It is now the symbol of Ten-Mile Gallery. In addition, Couple Rocks consists of two rocks standing together. The left rock is steep and tall while the right one is gentle and short, resembling a couple whispering gently to each other.

The gorge is said to be an ancient battlefield. Because of the rough road, it has not been disturbed by too many visitors and the scenery is pristine and wonderful. Visitors may consider going here to experience the steep peaks. Be careful on the roads, however, to avoid injury.

Mandarin Duck Waterfall is a 50-meters-high waterfall in two stages, or steps, where the water spills brokenly over over the upper ledge, producing mists so thick that they resemble fog, and where the sheer drop from the lower ledge is so forceful that it produces a thundering sound characteristic of the grandest of waterfalls anywhere.

Surrounded by steep peaks, Baofeng Lake is the only water site in the core scenic area of Zhangjiajie. The scenic spot contains two major parts: Boafeng Lake and Yingwo Village. Visitors may take a boat to enjoy the clear lake reflecting the nearby mountains or admire the ancient temples in Yingwo Village. Moreover, there is a Folk Song Festival held here every April, where young lovers sing folk songs to express their love for each other.

Yellow Dragon Cave is praised as the “All-round Champion Karst Cave in the World”. With an area of about 10 hectares, a length of about 4.7 miles (7.5 kilometers) and a vertical height of about 460 feet (140 meters), it is the largest karst cave in China. Inside are various kinds of stalactites, stalagmites, and stone columns. The best-known site in the cave is the Dragon Palace, which consists of many unusual stones such as the Magic Cudgel. It is the tallest stone pillar in the cave and is more than 200,000 years old.

How to Get to Suoxi Valley Nature Reserve

If you want to get rid of hustle of transportation and troublesome navigation, you can book a private tour package which covers visiting, dining and transfer from us. Our local tour guide and driver will escort you to Suoxi Valley Nature Reserve in Zhangjiajie with speed and convenience, and take care of all the details. You just need to focus on travel.

Take the bus to Suoxi Nature Reserve at Zhangjiajie Central Bus Station, which is close to the Zhangjiajie Railway Station. The buses depart from 06:00 to 17:30 about every 15 minutes in the day. It costs about CNY 12 and takes about 50-60 minutes.