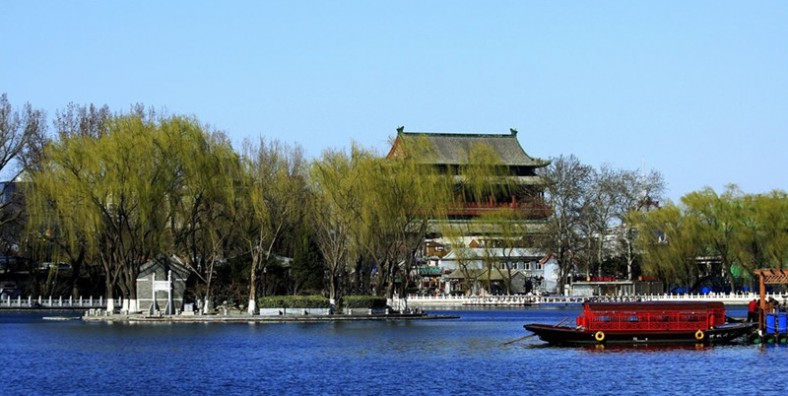 Why is Shichahai so special?

It is the only open scenic spot with open water in the inner city of Beijing. It is also a historical block with the largest area and the most complete style preservation in the city. It occupies an unique position in the planning and construction history of Beijing, including Qianhai, Houhai, Xihai and the scenic spots around it. Of the 25 historical and cultural reserves approved in 2000 in Beijing, Shichahai is the largest.

Besides, Shichahai bar street(Houhai Bar Street) is also one of the most famous bar area in Beijing. There are many bars in Shichahai, mostly built near banks. Some are just cabins, some are two-story buildings. Spend a night at bar street is also a good choice.

What to See in Shichahai

The greatest point of interest in Shichahai today is its residences, Hutong and Courtyard. In and around Beijing City, Shichahai is one of the best places to view well-preserved Hutongs and courtyards. Visiting Hutongs by pedicab has become a popular activity for visitors from China and abroad. As Shichahai is close to Drum Tower, and the north gate of Beihai Park, which is one of the best of China’s classical gardens with artificial hills, pavilions, halls, temples and covered corridors, visitors can take buses reaching either of them and then visit Shichahai.

Prince Gong’s palace is located in the northwest corner of Shichahai. It is a typical palace garden with both the central axis and the symmetry of Shichahai’s beautiful scenery. Founded at the end of the 18th century, it is the best preserved Qing Dynasty palace in Beijing and can be called “the pearl of Shichahai”. It used to be the mansion of He Shen, a grand scholar in the late Ganlong period, and was later changed to the mansion of Yi Xin, Prince Gong. The scenery in the park is unique and exquisite, and it is a national key cultural relic protection unit.

The bell and drum tower “beats the drum first and then the bell” when setting the watch. When the second watch arrives at the fifth watch, “only striking the clock but not beating the drum”; At dawn, it is “beat the drum first and then the bell.” The method of drumming is to strike 18 times quickly and then 18 times slowly, for a total of 6 times and 108 times. The same is true for striking the clock.

Guanghua Temple is located at No.31 Yaer Hutong, north of Shichahai. It is a large Buddhist temple. Guanghua Temple was built in Yuan Dynasty. Legend has it that it was built by an eminent monk, hence its name.

Mei Lanfang’s former residence is located at No.9, Huguosi Street, Xicheng District. It was originally part of Qing Prince’s mansion.

How to Get to Shichahai Area

One thought on “Shichahai Lake Park in Beijing”