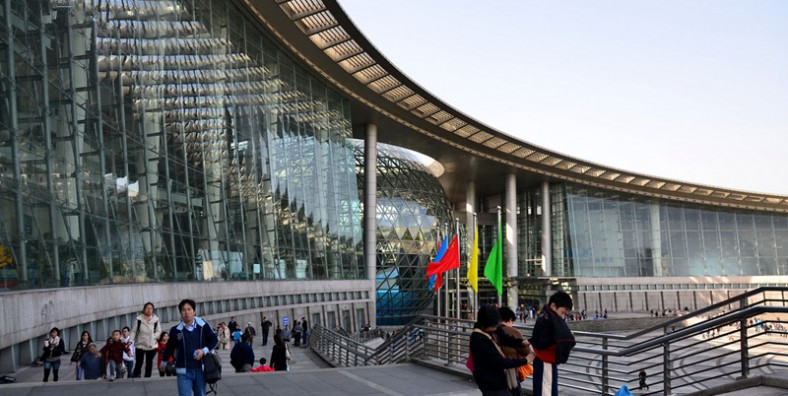 Shanghai Science and Technology Museum is one of China's most-visited museums. With the theme of "nature, human and technology", SSTM is committed to popularizing science in high technology.

Address in English: No.2000, Century Avenue in Shanghai

Why is Shanghai Science and Technology Museum so Special?

Shanghai Science and Technology Museum is one of China’s most-visited museums. With the theme of “nature, human and technology”, SSTM is committed to popularizing science in high technology. There are 11 permanent exhibition halls with themes of biodiversity, crust exploration, cradle of designers, light of wisdom, home planet, information age, robot world, light of exploration, human and health, space navigation, children’s fantasy world, and 2 special exhibition halls of spider world and animal world. Two relief galleries for ancient Chinese explorers of technology and science, as well as an information wall for academicians of the Chinese Academy of Sciences and the Chinese Academy of engineering. SSTM has built four cinemas in the Museum: IMAX 3D, IMAX dome, Iwerks 4D and Space Theater.

Where is Shanghai Science and Technology Museum

The Shanghai Science and Technology Museum includes three parts.The main hall of the museum is located at No.2000, Century Avenue in Shanghai.

Century Square was built in 1995. Shanghai Science and Technology Museum is planned to be built on the west side as a key project of science popularization in the Yangtze River Delta. From October 20 to 21, 2001, the museum opened the conference hall in time to host the APEC leaders’ meeting, and hosted the top Chinese leader Jiang Zemin, Russian President Vladimir Putin and US President George W. Bush.
The first phase of the project was completed on 18 December 2001 and the exhibits were opened to the public.
The second phase of the project opened in May 2005, when it was the first science and Technology Museum certified to ISO 9000 / 14000 quality and environmental standards. From its opening to 2010, it attracted 19.5 million tourists. From January to May 2010, the children’s activity area and the light of wisdom exhibition were renovated before the Shanghai World Expo. Shanghai Science and Technology Museum was initially rated as AAAA tourist attraction by the National Tourism Administration, and then upgraded to AAAA.

At the Animal World, visitors will be able to understand how animals from the five continents and four plates adapt to different environments.

A large number of interactive exhibits demonstrate some typical phenomena, basic rules and principles of mathematics, physics, chemistry and biology. Visitors can explore the secrets of science which will help them to improve their operational ability.

The exhibition area of Spectrum of Life is a miniature of natural scenery of Yunnan in southwest China, which shows the diversity of nature from three aspects: species diversity, ecosystem diversity and gene diversity. The exhibition area is divided into three areas: tropical rain forest, stone forest and residence of the Dai nationality.

This is a colorful Children’s Playground.

​Visitors can find out the definition, method and lifestyle of health at the Human Beings and Health area.

Science in the 19th century seemed to be developing just fine while more discoveries needed to be unveiled. Human’s exploration pushed on and scientists in the 20th century broke the old chains with their curiosity, courage and wisdom and depicted for us a brand new picture of the world.

The section is themed “the development and application of robotics” and displays fixed programed robots, intelligent control robots, special robots and common robots etc.. As information technology develops, robots are applied in every aspect of our lives. Now let’s go and see the robots’ skill set.

The development of information technology has greatly changed the way we live, work and study. Technologies like the Internet, image identification, speech recognition, virtual reality and computer simulation are becoming an indispensable part of our life.

The boom in population and the rapid growth of productivity have led to a series of ecological environment issues. How can we deal with them? Seek together a harmonious co-existence with nature.

1.There are also some activities which are held on Shanghai Science and Technology Museum.\

One thought on “Shanghai Science and Technology Museum”