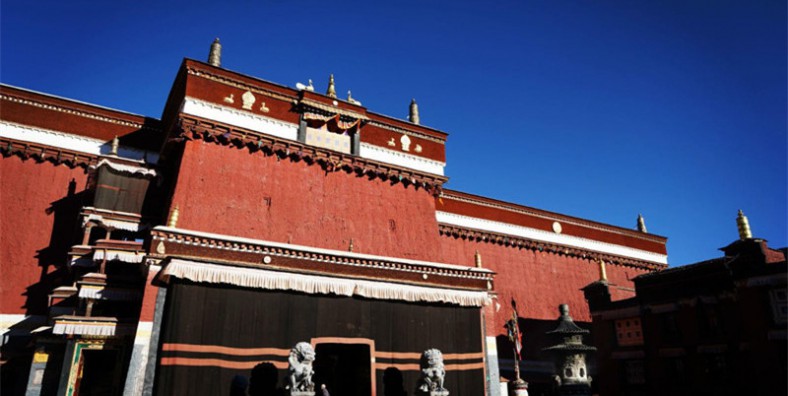 Sakya Temple was listed as a national key cultural relic protection unit by the State Council in 1961. Sakya Monastery is famed as the "Second Dunhuang" due to its colossal collection of numerous Tibetan Buddhist scriptures, murals and Thangkas.

Why is Tashilhunpo Monastery So Special?

Sakya Monastery, also known as Pel Sakya, is a Buddhist monastery. As the seat of the Sakya (or Sakyapa) school of Tibetan Buddhism, it was founded in 1073, by Konchok Gyelpo(萨钦贡噶宁波). Its Mongolian architecture is quite different from that of temples in Lhasa and Yarlung(雅鲁藏布江). The only surviving ancient building is the Lhakang Chempo（克楚拉康）or Sibgon Trulpa（西贡）.

Where is Sakya Monastery

Situated 160 km west of Shigatse, Sakya is the principal monastery of the Sakyapa Sect of Tibetan Buddhism. Its medieval Mongolian architecture is quite different from temples in Lhasa and Yarlung.

History and Development of Sakya Monastery

As the seat of the Sakya (or Sakyapa) school of Tibetan Buddhism, it was founded in 1073, by Konchok Gyelpo, originally a Nyingmapa monk of the powerful noble family of the Tsang and became the first Sakya Trizin（萨迦法王）. Its powerful abbots governed Tibet during the 13th and the 14th centuries under the overlordship of the Mongol Yuan dynasty after the downfall of the Tibetan Empire until they were eclipsed by the rise of the new Kagyu and Gelug schools of Tibetan Buddhism.

Its Mongolian architecture is quite different from that of temples in Lhasa and Yarlung. The only surviving ancient building is the Lhakang Chempo or Sibgon Trulpa. Originally a cave in the mountainside, it was built in 1268 by dpon-chen Sakya Sangpo in 1268 and restored in the 16th century. It contains some of the most magnificent surviving artwork in all of Tibet, which appears not to have been damaged in recent times. The Gompa grounds cover more than 18,000 square meters, while the huge main hall covers some 6,000 square meters.

After the March 10th, 1959 Lhasa uprising to protect the 14th Dalai Lama from the Communist Chinese People’s Liberation Army, the majority Sakya Monastery’s monks were forced to leave. As Dawa Norbu states in his book states, “previously there were about five hundred monks in the Great Sakya Monastery, but by the end of 1959 only 36 aged monks remained.” Most of the buildings of the monastery are in ruins, because they were destroyed during the Cultural Revolution.

As to the great library of Sakya, it is on shelves along the walls of the great hall of the Lhakhang chen-po. There are preserved here many volumes written in gold letters; the pages are six feet long by eighteen inches in breadth. In the margin of each page is illumination, and the first four volumes have in them pictures of the thousand Buddhas. These books are bound in iron. They were prepared under orders of the Emperor Kublai Khan, and presented to the Phagpa（帕巴） lama on his second visit to Beijing.

There is also preserved in this temple a conch shell with whorls turning from left to right, a present from Kublai（忽必烈） to Phagpa. It is only blown by the lamas when the request is accompanied by a present of seven ounces of silver; but to blow it, or have it blown, is held to be an act of great merit.

A huge library of as many as 84,000 scrolls was found sealed up in a wall 60 meters long and 10 meters high at Sakya Monastery in 2003. It is expected that most of them will prove to be Buddhist scriptures although they may well also include works of literature, and on history, philosophy, astronomy, mathematics and art. They are thought to have remained untouched for hundreds of years. They are being examined by the Tibetan Academy of Social Sciences.

The current Sakya Trizin(萨迦法王), throne holder of the Sakyapa(萨迦派) went into exile in India in 1959 following the Chinese invasion of Tibet. So you can also visit the Sakya Monastery in India, monks and scholars saved a number of original scrolls from the original Sakya Monastery in Tibet and smuggled them to India for safekeeping.

Temperatures in Shigatse range is from a high of 23℃ to a low of -25℃, with an annual average temperature of 6.3℃. From November to April in the next year, it is unsuitable for travelling to Shigatse because of the low temperature. July and August are considered as the rainy season. During this time, it often rains in the evening. The best time to visit Tashilhunpo Monastery is April to October.