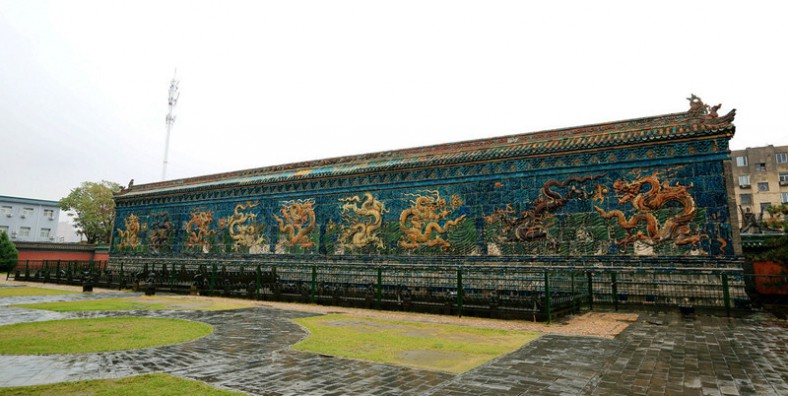 Why is Nine Dragon Screen So Special?

The Datong Nine-Dragon Screen Wall was built at the start of the Ming Dynasty (1368).45.5 meters long, 8 meters high, and 22 meters thick. The screen was constructed in the year 1392 by Zhu Yuanzhang, who was the first Ming Dynasty emperor, during his 25 years of reign for his 13th son Zhu Gui. Thus this is the oldest of all the screens present in China. The nine dragons, each playing with a pearl were carved very lifelike. Colorful paint has been applied to the carvings to bring the dragons to life vividly, as they would have been over 600 years ago.

Where is Nine Dragon Screen?

Nine Dragon Screen is sited in Heyang Street in downtown of Datong City, Shanxi Province, China. The address of the screen is Jiulongbi scenic area, No. 18, Dadong street, Datong City. And the screen lies about 5 km from Datong Railway Station, and about 20 km from Datong Yungang Airport.

How to Get toNine Dragon Screen?

If you want to get rid of hustle of transportation and troublesome navigation, you can book a private tour package which covers visiting, dining and transfer from us. Our local tour guide and driver will escort you to Nine Dragon Screen with speed and convenience, and take care of all the details. You just need to focus on travel.

The screen is made of yellow, green, blue, purple, black, white and other colored glaze. The wall is composed of three parts: the bottom part, the middle part, and the upper part. The east and west sides are the patterns of rising sun and the bright moon in the sky, and are lined with river cliffs, sea water and cloud patterns.

The center part is a sitting dragon, in yellow color, which is the the imperial color. Tourists can find there are another eight dragons around the central one, and they are in different color.  The nine dragons are life-like and illustrating their ability of calling the wind and controlling the rainfall. The areas around them are supplemented with images of plants, mountains, stones, water and grass. These patterns along with the nine dragons compliment each other.

Among the Yang numbers, nine is the biggest number and five is the number in the middle. Thus the nine and five are the important embodiment of the emperor’s authority. The nine dragons and their different color, position here, symbolize the supreme power of the emperor.