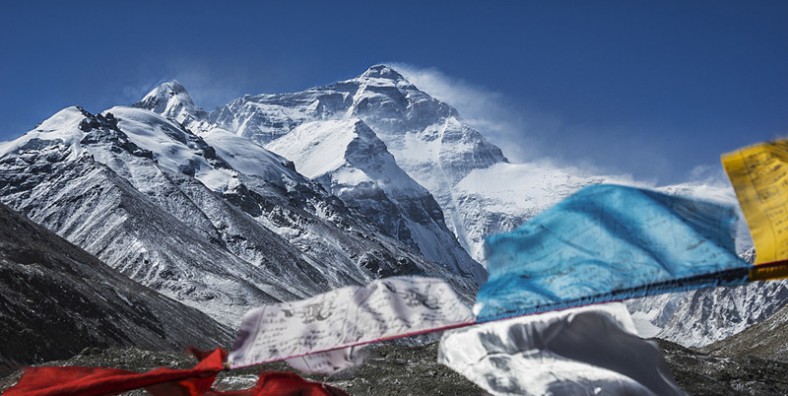 Why is Mt. Everest so special?

Mt. Everest (also known as Mt. Qomolangma in Tibet), the world’s highest mountain with an 8,848 meters (29,029 ft) height, is located in the Mahalangur section of the Himalayas, the international border between Nepal and China. With magnificent and steep topography, it covers with snow all the year round and resembles the shape of a pyramid. Its Tibetan name Qomolangma means “Goddess the Third” making this place even more mysterious.

History and Development of Mount Everest

The current official height of 8,848 meters (29,029 feet), recognized by China and Nepal, was established by a 1955 Indian survey and subsequently confirmed by a Chinese survey in 1975. In 2005, China remeasured the rock height of the mountain, with a result of 8844.43 meters. There followed an argument between China and Nepal as to whether the official height should be the rock height (8,844 meters, China) or the snow height (8,848 meters, Nepal). In 2010, an agreement was reached by both sides that the height of Everest is 8,848 meters, and Nepal recognizes China’s claim that the rock height of Everest is 8,844 meters. In 1865 ，Everest was given its official English name by the Royal Geographical Society, upon a recommendation by Andrew Waugh, the British Surveyor General of India. As there appeared to be several different local names, Waugh chose to name the mountain after his predecessor in the post, Sir George Everest, despite George Everest’s objections.

The first recorded efforts to reach Everest’s summit were made by British mountaineers. As Nepal did not allow foreigners into the country at the time, the British made several attempts on the north ridge route from the Tibetan side. After the first reconnaissance expedition by the British in 1921 reached 7,000 meters (22,970 feet) on the North Col, the 1922 expedition pushed the north ridge route up to 8,320 meters (27,300 feet), marking the first time a human had climbed above 8,000 meters (26,247 feet). Seven porters were killed in an avalanche on the descent from the North Col. The 1924 expedition resulted in one of the greatest mysteries on Everest to this day: George Mallory and Andrew Irvine made a final summit attempt on 8 June but never returned, sparking debate as to whether or not they were the first to reach the top. They had been spotted high on the mountain that day but disappeared in the clouds, never to be seen again, until Mallory’s body was found in 1999 at 8,155 meters (26,755 feet) on the north face. Tenzing Norgay and Edmund Hillary made the first official ascent of Everest in 1953, using the southeast ridge route. Tenzing had reached 8,595 meters (28,199 feet) the previous year as a member of the 1952 Swiss expedition. The Chinese mountaineering team of Wang Fuzhou, Gonpo, and Qu Yinhua made the first reported ascent of the peak from the north ridge on 25 May 1960.

Mount Everest attracts many climbers, some of them highly experienced mountaineers. There are two main climbing routes, one approaching the summit from the southeast in Nepal (known as the “standard route”) and the other from the north in Tibet, China. Mount Everest consists of sedimentary and metamorphic rocks that have been faulted southward over continental crust composed of Archean granulites of the Indian Plate during the Cenozoic collision of India with Asia. Yaks are often used to haul gear for Mount Everest climbs. They can haul 100 kg (220 pounds), have thick fur and big lungs.

Rongbuk monastery lies near the base of the north side of Mount Everest at 4,980 metres (16,340 feet) above sea level, at the end of the Dzakar Chu valley(春丕河谷). It is a Tibetan Buddhist monastery of the Nyingma (宁玛派) sect in Basum Township (巴松) and is the highest monastery in the world.

Everest Base Camp: refers to the living area set up by viewing the environment of the core area of Qomolangma Peak. There are two in China. The west base camp is located in Zhaxzong Township, Dingri County, Xigaze District, Tibet Autonomous Region (西藏自治区日喀则地区定日县扎西宗乡), and the east base camp is located in the Gamagou area, Karta County, Dingri County(Kaamo Tsangpo valley,定日县曲当乡的嘎玛沟), at an altitude of 5,200 meters. It is about 19 kilometers away from the top of Qomolangma Peak and is a national 5A-level tourist area.

Mount Everest Nature Reserve: The area of Mt. Everest has been built as one of the national natural reserves, wherein live thousands of kinds of plants, hundreds of varieties of wild animals and dense virgin forests. Many of these are precious and rare, like the first-class protected animal ounces and the valuable timber sandals, etc.

How to Get to Mount Everest in Tibet?

If you want to get rid of hustle of transportation and troublesome navigation, you can book a private tour package which covers visiting, dining and transfer from us. Our local tour guide and driver will escort you to Mount Everest with speed and convenience, and take care of all the details. You just need to focus on travel.

The best time for traveling or climbing Mt. Everest is the periods between late April and early June, along with early September and late October, with relatively mild and steady weather with less rain or snow.

1. Visitors who decide to climb the Mt. Everest can also stay in the Mount Everest Base Camp at night. Each room can accommodate 4 – 5 people, but you cannot expect too much from its condition. It is about 8 km to the Everest Base Camp.
2.One common piece of advice for those in the Everest region is to be on higher ground when around yaks and other animals, as they can knock people off the mountain if standing on the downhill edge of a trail.
3.  High Altitude Sickness Avoiding: Bring enough water and some thick clothes, eating more fruits and vegetables rich in vitamins and so on.
4. Pay attention to respect the local customs in the monastery.
5. Tibet Travel Permit is a must to travel in Tibet, otherwise, visitors cannot enter into Tibet.

2 thoughts on “Mount Everest in Tibet”