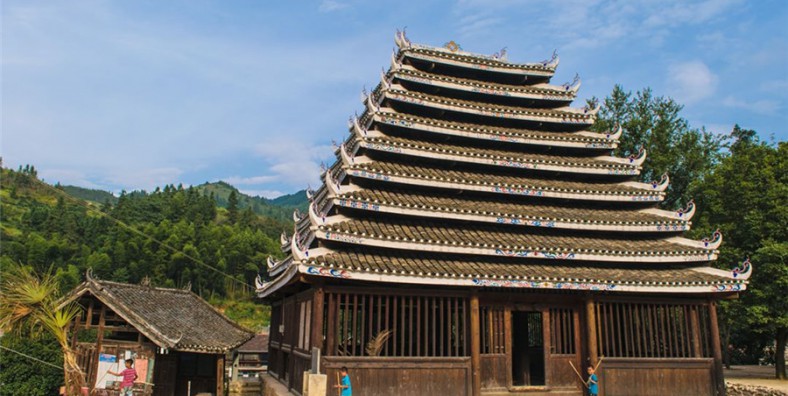 Situated in Mapang Village, the Mapang Drum Tower is a typical drum tower in Sanjiang. Originally built in the last years of the Qing Dynasty (1644-1911) and rebuilt in 1943, the tower has a square foundation.

Mapang Drum Tower has nine floors and is 13 meters in height. Shaping like a palace, the tower was engraved with dragons and phoenixes on the eaves. A sculpture of crane is standing on the top of the tower which symbolizes auspiciousness. In the center of the first floor, there is a big fire pit, in winter, people sitting around it and getting warm from it. On its wall, there are many pictures depict the beautiful local landscapes. The entire structure is joined together with redwood, without a single iron nail. It is said that the Dong architects drew the blueprint with only a carpenter’s square and a bamboo marker.

A Symbol of the Mapang Village

The drum tower is the symbol of the Mapang village. There are benches, tables for people to rest and do their religious activities. It is also used as a meeting house, and place to send signals to the entire village. When there was an emergency, like a fire, or an attack, the drum would be beaten, and because of the design of the structure, the sound would be amplified and could be heard for miles around. Not far from the Mapang Drum Tower, there are other two beautiful drum towers standing by a small river, they make up a drum tower group in the village.

Usually, Mapang Drum Tower is a place for villagers to get together. This is a civilized site contained the oldest culture of Mapang Village. People would like to come here for ceremonies, meetings, festival gatherings, as well as recreation, activates. During festivals, the villagers will gather together in front of the Mapang Drum Tower, singing, dancing and performing on the lusheng, which is a reed pipe wind instrument used by the Miao, Yao, and Dong Nationalities.