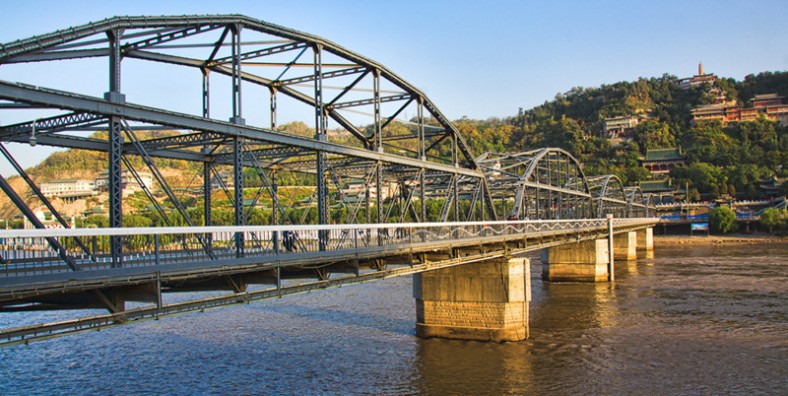 Why is Iron Bridge of Yellow River So Special?

The Zhongshan Bridge, or the Yellow River Iron Bridge, is located at the northern part of downtown Lanzhou. Dubbed “the First Bridge across the Yellow River,” it has become one of the city’s landmarks. Before its construction, there was a bateau bridge named Zhenyuan Bridge, which had been built in 1398. In 1907, engineers from Belgium, Germany and the U.S., together with local workers, jointly built the sturdy and durable iron bridge. In honor of Sun Yat-sen (1866-1925), a great Chinese revolutionary, the bridge was renamed Zhongshan Bridge in 1942 and has witnessed the vicissitudes along the Yellow River over the past century.

Where is Iron Bridge of Yellow River?

Iron Bridge of Yellow River lies at the foot of Bai Ta Mountain and in front of Jin Cheng Pass in Lanzhou city, the capital of Gansu Province. And its address in English is Chengguan District, Lanzhou City; the address in Chinese is 兰州市城关区.

If you want to get rid of hustle of transportation and troublesome navigation, you can book a private tour package which covers visiting, dining and transfer from us. Our local tour guide and driver will escort you to Iron Bridge of Yellow River with speed and convenience, and take care of all the details. You just need to focus on travel.

History of the Iron Bridge of Yellow River in Lanzhou

Before Zhongshan Bridge was built there were many floating bridges over the Yellow River, but only one existed for a relatively long period. This bridge was called Zhen Yuan Floating Bridge and was made up of more than 20 ships, tied up by ropes and chains. It floated on the river in order to help people pass over, but it was neither solid nor safe enough. Almost every year floods destroyed the bridge or even killed people. Problem also arose in the winter, when ice would build up on the river, so the bridge would have to undergo the costly process of being disassembled and then re-built in the spring. Used for over 500 years, the Zhen Yuan Floating Bridges was finally retired in 1909, when an iron bridge was built. This new bridge is what we call the First Bridge over the Yellow River.

Zhongshan Bridge is 234 meters (768 feet) long and 7.5 meters (25 feet) wide with six piers and five bridge openings, on the top of which five arched steel-structured girders span. In order to hold “the First Chinese Silk Road Festival”, Lanzhou municipal government funded an 806-square-meter (8,676-square-feet) waterside square to be built on the north part of Zhongshan Bridge.

On the south part of the bridge stands a monument of 5.5 meters (18 feet) tall and 1.5 meters (5 feet) wide, on whose body is carved with the inscription of “the First Bridge over the Yellow River”; on the reverse side of the monument is carved the inscription of “the Record of the First Bridge of the Yellow River”. The top of the monument is carved with the pattern of “the Two Dragons Playing with a Pearl”.