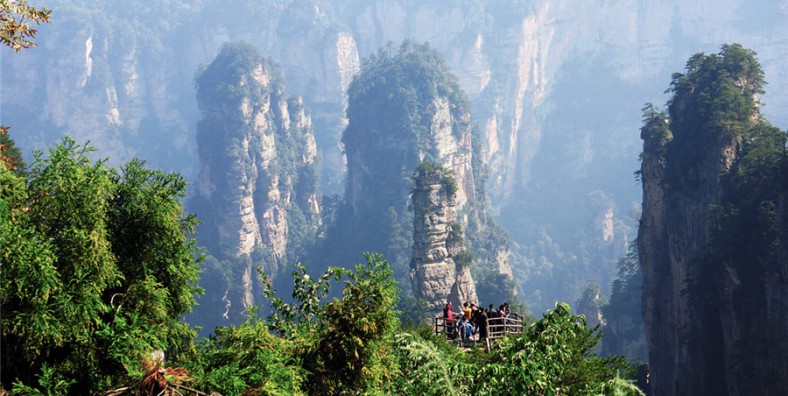 Huangshi Village, located in Wulingyuan Scenic Area in Zhangjiajie, is one of the top 5 highlight travel itineraries of China. It is said that during the Han Dunasty, Zhang Liang (a politician) quitted from the political field and started his round tour. When he came to this area, he was blocked by officials.

Tickets: ¥228/person for Entrance Fee (Including in the Ticket Package)

Why is Huangshi Village in Wulingyuan Scenic Area So Special?

Wulingyuan Scenic Area (also known as Wulingyuan National Park) is located in northwest of Hunan Province in central China. It consists of the Zhangjiajie Forest Park, Suoxi Valley Nature Reserve in Cili County and Tianmen Mountain National Forest Park in Sangzhi County, with a total area of about 500 square kilometers. Yangjiajie is a recently discovered a new area.

On the eastern peak, there is a platform strengthening from the cliff. Platform Base which is 5 meters (16 feet) high with an area of 20 meters (24 square yards), and the other one is piling up on the base which is 10 meters (33 feet) high with a diameter of 5 meters (5.4 yards) on the top of the rock. 10 people can stand on the platform at the same time. When standing here, people will have a feeling in the sky. Looking around, wind rolls clouds. Looking down, river flows in forest, waterfall pours down to valleys.

Pillar in the South Sky

There is a 200-meter-high solitary peak in the southeastern valley. Bush on the top as the cap for it, bare rocks and stones, while trees cover the bottom. And because it is situated near the foot of South Sky Gate, thus it is called Pillar in the South Sky. This pillar is firmly standing on the ground and highly stretches to the hall.

After hundreds of stone steps from the front mountain in Huangshi Village, a large area of virgin forest with fir trees will be presented to visitors. Along the road, fir trees bring fresh air and breeze for people.

Near the Peak of Huangshi Village, a natural wall painting can be seen when look back on the road. Washing marks on the cliff in the Yaozi Village form an unbelievable natural wall painting. Typical hanging buildings hide behind green trees. Children with battles walk along the route. Bridges across river, sunlight shines the ancient road. A poetic picture is represented for you.

How to Get to Huangshi Village

If you want to get rid of hustle of transportation and troublesome navigation, you can book a private tour package which covers visiting, dining and transfer from us. Our local tour guide and driver will escort you Huangshi Village in Wulingyuan Scenic Area, Zhangjiajie with speed and convenience, and take care of all the details. You just need to focus on travel.