Jiuzhaigou Festivals and Events introduce a brief introduction of festivals and activities and tell travelers Top Things to Do for Jiuzhaigou festivals Tours and important Jiuzhaigou events and activities. With most residents of Tibetan and Qiang ethnic groups, Jiuzhaigou features most traditional festivals of local Tibetan and Qiang people. There are Tibetan New Year, Mazi Fair, Huanglong Temple Fair, Lamp Festival, Qiang’s New Year, as well as tourist festival such as Ice-waterfall Tourism Festival.

Also known as Losar, the Tibetan New Year is the most important festival for the Tibetan, just as the Spring Festival to the Han’s people. The celebration begins on December 29 and lasts 2 weeks based on the Tibetan Calendar, when Tibetan families enjoy steaming hot meat and tasty Zajiu, make house fluttering with coloured prayer-flags and have joys with Guozhuang dance. Tibetan New Year offers the travelers a great opportunity to enjoy the annual festival with local Tibetans.

Mazi Fair is a grand ceremony held in Zharu Temple, kicking off on 15th day of third lunar month with various religious and cultural activities. During the three days before festival, all monks will gather in the temple chanting sutra. On the day of festival, the Tibetan villages will join in the festival in beautiful holiday costumes and offer Hadas to each other to express their good wishes. There are also singing and dancing, Tibetan opera performances and other celebrations in the temple

With a long history, the Huanglong Temple Fair attracts not only Tibetans, but also Hui, Han, Qiang people, and ethnic groups from Qinghai and Gansu provinces, who are dressed up in festival costumes and gather in Huanglong Temple for celebrations. It will be held during every 12th - 15th day of 6th lunar month.

To commemorate the death of Tsongkhapa, the founder of the Gelug Sect of Buddhism, Lamp Festival falls on 15th day of 8th lunar month. On this day, butter lamps will be lighted up on the altar of every Gelug temples. So will be done in all Tibetan families, day and night.

The Qiang New Year comes on every lunar October 1. It is the most important traditional festival of the year to thank God for the golden harvest, lasting for three to five days. According to the Qiang’s custom, people will worship the God of Heaven, Mountain and Village.
All the villagers will have a family reunion dinner, drinking and having fun. People congratulate each other and greet each other during the festival.

The Ice-Waterfall Tourism Festival has been successfully held for many times in Jiuzhaigou, which usually occurs during January and lasts about two months. As winter comes, Jiuzhaigou becomes a "snow fairy world" with ice crystal hanging on the tree, graceful and beautiful. During this time, a series of activities related to the sliver scenery will be organized to celebrate the snow world.

Risang Culture Festival is also called the festival of offering "holy mountain and holy water". Jiuzhaigou Tibetans believe in Bon Religion, believing that all things have gods, water has gods of water, mountain has gods of mountains, and Risang Cultural Festival is their traditional festival to worship the sacred mountain and water. Jiuzhaigou is held once a year in April (June in the Gregorian calendar) for a period of five days, and tourists can participate.

Similar to the "Spring Festival Gala", it is the most popular night activities in Jiuzhaigou. There are Gaoyuanhong, Zangmi, Jiuzhai paradise from which to choose. Among them, the stage play “Zangmi” is the most famous one directed by Yang Liping and Rongzhong Erjia(a famous singer in Aba).

With the detailed introduction in "Lonely Planet", Songpan Horse-riding has already well-know abroad, but little known at home. Normally it is one-to-one service between guide and guests. The visitor is offered a horse and the guide rides one, horse carrying food, tents and other camping equipment, as well as Tibetan robe and raincoat for keeping warm. Tourists only need to ride a horse to view the scenery and the guide will camp, cook and feed horses.

Jiuzhaigou Folk Custom Month is held in March and April of each year for a period of one month. It displays Jiuzhaigou's remote ethnic culture and charming folk custom. Tourists and friends can take part in to experience the most enthusiastic charm of Tibetan. It mainly focuses on beautiful scenery, food, costumes, wedding exhibitions, etc. Accompanied by rich local folk custom culture performances, activities such as amorous feelings carnival night will also be held to release the most exciting Jiuzhaigou customs and display the most distinctive Jiuzhaigou culture.

Some local Tibetan family being visited by tourists will hold a song and dance banquet at night. It is featured with Tibetan & Qiang dance, folk songs, religious ritual performances, ethnic costumes, ethnic Musical Instruments, Tibetan weddings, and Guozhuang ethnic customs. If you have time to take part in, it is a good experience. It is very lively, and you can taste Tibetan food.

It is said that Jiuzhai Paradise Theater is the largest indoor stage in the world, with the main musicals and operas “The Dream Journey”. It organizes a wonderful performance every night. People can sing and dance with the musical rhythm.

The Ice-Waterfall Tourism Festival in Jiuzhaigou

The Ice-Waterfall Tourism Festival in Jiuzhaigou... 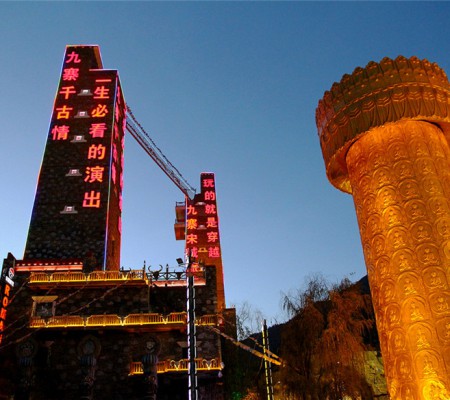 Romantic Show (Jiuzhai Qianguqing) in Jiuzhaigou, Aba introduces the main attractions, Reviews, The best time to visit, How to Get there, the highlights, facts, history, photos, weather, accommodation, visiting...