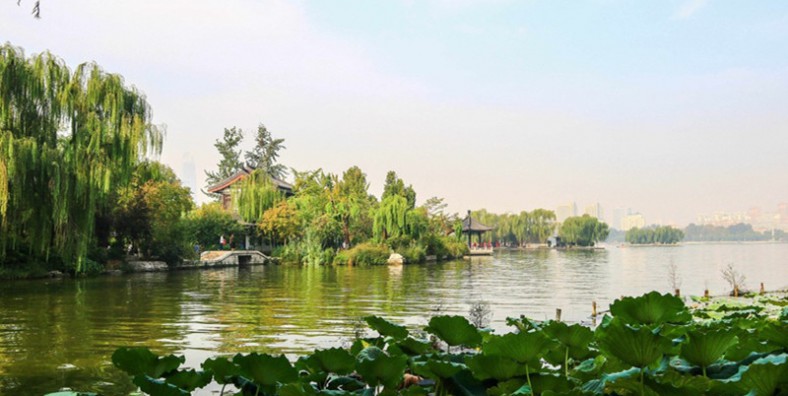 Why is Daming Lake in Jinan So Special?

Daming Lake Park is regarded as one of the three must-see spots in Jinan (the others are Baotu Spring Park and Thousand-Buddha Mountain). Daming Lake is the largest lake in the city of Jinan, it is a natural lake formed after all springs converge. The spring was flowed into by the south bank, was built in the north water valve on the north bank and flowed out since Song Dynasty when water is full, formed by waterproof igneous rock in the lakebed, therefore “the permanent rain does not rise, do not dry up long and on land” in the lake water, mystery ecological naturally that has “snake disappears, the frog does not chirp”.

Where is Daming Lake in Jinan?

Daming Lake is situated in the center of Jinan City, Shandong Province, China. And the address of the lake is No.271 Daminghu Road, Lixia District, Jinan 250000, China.

How to Get to Daming Lake in Jinan?

If you want to get rid of hustle of transportation and troublesome navigation, you can book a private tour package which covers visiting, dining and transfer from us. Our local tour guide and driver will escort you to Daming Lake in Jinan with speed and convenience, and take care of all the details. You just need to focus on travel.

At the northwest bank of the lake stands Tie Xuan Temple (Tie Gong Temple). Built in 1792, it is a memorial to an official of the Ming Dynasty, Tie Xuan. He was a loyal military officer leading the army fighting for his emperor and local people, finally was killed cruelly after the failure. Admiring his heroic spirit and loyalty, the later generations built the temple. Tie Xuan Temple is a traditional courtyard in square shape. In the courtyard are Tie Xuan Temple, Small Canglang Pavilion, etc.

Tie Gong Temple is located in the western end of the northern shore of Daming Lake. It was built in AD 1792 in Qing Dynasty, to commemorate the Minister of the Board of War of Ming Dynasty, Tie Xuan. Tie Xuan was renowned for his heroism and loyalty in the defense of the city against the rebelling Prince Zhu Di, the later Yongle Emperor. The memorial hall was erected during the times of the Qing Dynasty. The Tie Gong Temple is an ethnic-style courtyard. Covering 6,000 square meters, it consists of winding corridors, and three ancestral temples. The temple has quite environment with pinery and simple and elegant buildings.

Built on the largest isle within Daming Lake, Lixiating is a wooden structure with red pillars and gray tiles. Historically, Lixiating had been a place of assembly for men of letters. The famous and prestigious Tang poet, Du Fu (712-770), once went there to drink and write poems. Emperor Qianlong of the Qing Dynasty wrote down the characters “历下亭” himself for its horizontal inscribed board. Unfortunately, the original pavilion was destroyed. The one we see now was rebuilt during the reign of Emperor Kangxi in the Qing Dynasty, and is now over 300 years old.